Mystery Woman
Tell us more for better jobs, advice
and connections
YOUR GROUPS
Discover and join groups with like-minded women who share your interests, profession, and lifestyle.
COMPANIES YOU FOLLOW
Get alerted when there are new employee reviews.
YOUR JOB ALERTS
Get notified when new jobs are posted.
Got the Power

I have an early memory of my mother, a pharmaceutical sales rep, preparing to leave for work in the morning. It’s the mid-1990s, and she’s dressed for a day of visiting doctors’ offices in a smart, shell-pink skirt suit, her hair shoulder length and curled, her pointed-toe pumps a matching shade of pink. The pumps, especially, stand out in my memory, as I tottered over to give her a goodbye kiss and — promptly barfed on them.

Prior to the addition of my bodily fluids as an accessory, though, my mom was looking sharp. Fast forward to today, and she’s still a well-dressed pharmaceutical rep, but her workwear style has veered in a more casual direction (think sweater dresses and knee-high boots). It’s reflective of a style evolution that’s taken place for a lot of people, across gender identities and workplaces. Formal dress codes are on the decline, and that’s true of even more traditionally buttoned-up industries, like finance. Suits just aren’t something the majority of us are wearing to our 9-to-5s today. And when they are worn, a recent Vox article, “How the Power Suit Lost Its Power,” argued, it’s as a sign not of power and professionalism, but of contrition.

“These days, when you are not in control you wear a suit,” Vox’s writer states. “The suit has become a uniform for the powerless… when you’re in control, at least in relative control, from the C-suite down to the long rectangular table in the open-air office, you wear whatever you want, which is almost never a suit.”

Of course, this is speaking to a largely cis-gender male experience of relating to clothes (which the writer, in all fairness, does note). For femme and non-binary people — namely, the people suits weren’t originally designed for — they can still carry a subversive and often empowering connotation, signaling confidence, self-possession and autonomy.

It was this side of the spectrum that I was curious about tapping into when I had the idea to wear power suits to work. Every day. For a week.

I am what some would call a mid-to-late 20s, Brooklyn-dwelling, creative-leaning professional (#tropes). While I do enjoy expressing myself through my clothing and therefore put thought into the way I dress, I will still on occasion do things like wear what is technically a crop top to work and hope that my skirt is high-waisted enough to conceal it. Exhibit A: 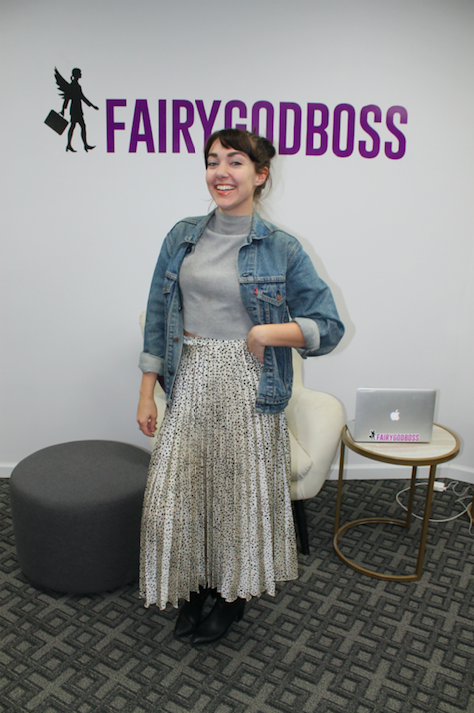 Suffice it to say, coordinated suit sets aren’t something that feature heavily in my wardrobe. Which is why, when the female-founded brand M.M. LaFleur expressed interest in supplying me with suits for my experiment, I was curious about who this new Power Suit Liv could be. Would I be transformed as a professional, from the outside in? At the very least, I figured, I’d be able to live out my ‘90s sartorial dream of channeling my mom at her peak Elizabeth James-esque aesthetic (prior to the “I’m not mature enough for this!” Nick Parker meltdown).

Here, friends, is a snapshot of how my week actually played out. 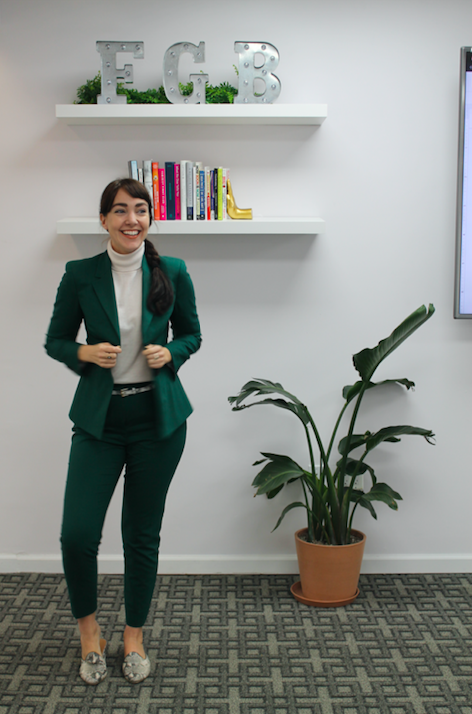 Waking up Monday to kick off my power suit week, I incorrectly assumed that getting ready would be a breeze. The getting dressed part was; my suit, a dark green number from M.M. LaFleur, was hanging in the closet, along with a sleeveless turtleneck (major professorial vibes happening) and a matching snakeskin belt and shoes I’d picked up at Target. But dressing so intentionally meant I now felt a need to elevate my hair and makeup, too, and I wound up rushing out the door later than I’d planned.

Seemingly not the most powerful start to the day, and yet… I found myself approaching the office calm and fully composed, free of the anxiety that ordinarily compels me to walk Very Fast if I’m running late. Could it be that my power-suit thinking had already begun?

My day went on more or less as planned from there, with meetings stacked from the better part of 11 a.m. to 4 p.m. (oof). I could already tell that being busy while wearing a power suit made me feel purposeful and more energized, though. I ordered my afternoon coffee with an extra shot of espresso, because power. 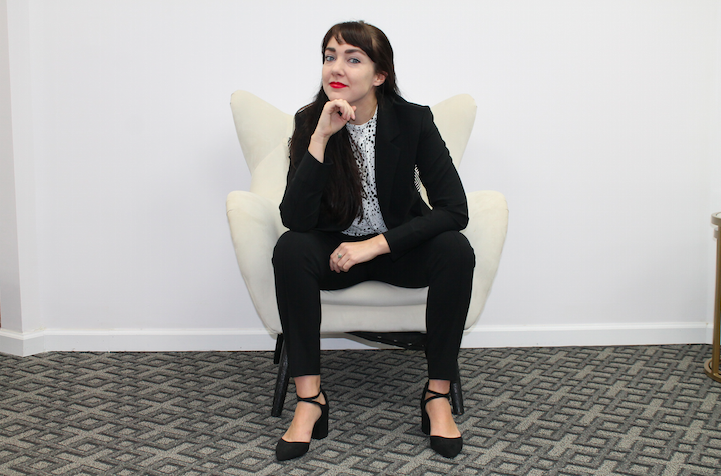 Tuesday’s outfit was the most conservative of the looks I was to sport that week: a black suit jacket and pants from M.M. LaFleur’s new Packable Suiting collection, designed to be compact and totally wrinkle free, along with a mock-neck black and white spotted blouse. Lastly, I dragged out a dusty pair of heels from the depths of my closet.

Toward the end of the work day, I went to write a self-assessment for my company’s upcoming bi-annual performance reviews, completing the various sections of my report in the tone I’d ordinarily use. Then, something — the suit? — stopped me. Scanning the assessment, I caught multiple instances where I’d used language that ultimately served to undermine my contributions. Being self-deprecating is something I’m often guilty of (blame A. my sense of humor but also B. and C., gendered societal conditioning and defense mechanisms, woo!), as well as something I'm trying to be more thoughtful about.

So, I deleted any traces of acquiescent language on the report before hitting “send” and heading to meet a friend for dinner. Later, to cap the day off, I ordered a car home, despite the restaurant’s proximity to my apartment. Heels are brutal (at this point, it’d been 13 hours), and I am unsure how people do this. 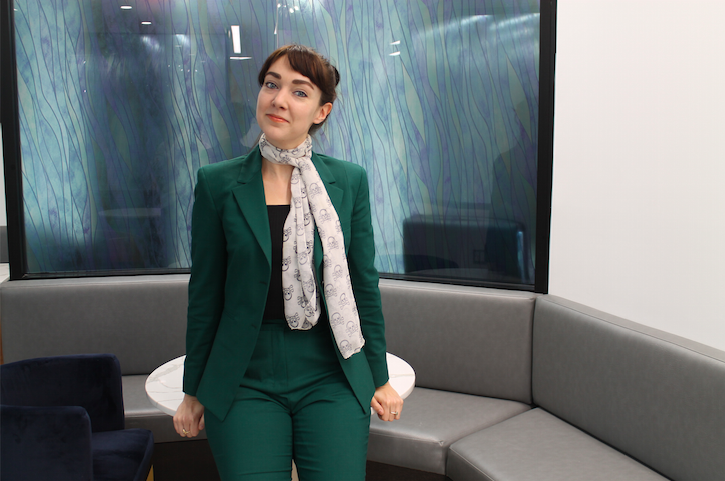 My outfit for Wednesday was my favorite: the same green M.M. LaFluer suit I wore on Monday, styled with a skull-and-crossbones scarf from my coworker, Mary, and the black suede heels from the day before. This time, though, I threw the heels in a bag and made my 50-minute commute in flats, actualizing my preteen image of what me as a Working Adult in New York City would look like. Apparently, that image also involved me (happily) dressed somewhere along the spectrum of C-suite and edgy flight attendant.

Having plowed through the work day — apparently, I use verbs like “plow” to describe me at work now, because power!! — it was time for a social experiment. I was going to get drinks with a friend in Manhattan’s Financial District, a region I’ve generally only stumbled into if I’ve gotten lost while plant shopping in Chinatown.

For those who haven’t been, FiDi is, in a lot of ways, what you’d picture. It’s full of white men who work on Wall Street and wear suits (or, if they’re opting for a more casual look, puffy bomber vests and saddle shoes), and it’s literally built atop an African Burial Ground. It isn’t generally an area I’m opting to hang out in of my own volition. But I was curious to see if I’d feel any differently being there while dressed the part. So, I googled happy hour spots and met my friend at a bar that was also a steakhouse, because of course it was.

In retrospect, I realize that what I'd been expecting was a stereotype that may be at least a little outdated. I thought I’d be entering a space with super overt power dynamics and a gross misuse of social and financial capital on display. I was expecting “American Psycho,” without the murder. Instead, what I got was an upscale bar where the crowd did skew white and male, yes — but all-in-all, nothing about the experience felt especially exclamatory. (I realize that, for other folks, it may have felt like an unsafe space; my privilege in sauntering up to a bar as a white cis woman with money in her pocket is not lost on me.) In the end, for me, it was just a bar with incredibly overpriced cocktails. I ordered two, paid my tab of $45 after tip (*faints*) and left. 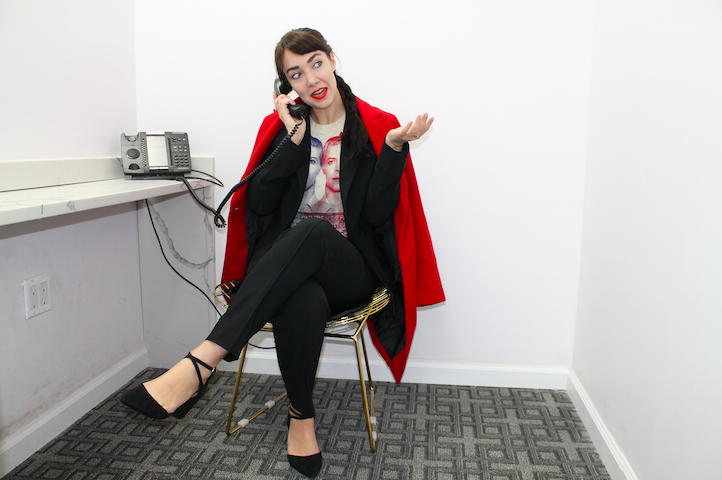 For Thursday, my outfit was centered on a “cool dad” aesthetic. I wore the pieces from M.M.’s Packable Suiting collection again, but this time with a Bowie T-shirt and a vintage red overcoat mixed in.

At the office, I got on the elevator with a coworker who half-jokingly asked me if I was dressed this way because I had job interviews scheduled. Later in the afternoon, a second coworker asked me the same question — which was definitely not a side effect of the experiment I’d been anticipating. (To my boss, if you’re reading this, just to quickly reiterate: job interviews were not a part of my week!)

Something that was a part of my work week, though, was a series of significant content strategy conversations within my team, and no shortage of data-pulling and meetings to accompany those conversations. Though it was a worthwhile and motivating process, it was also a lot to fit in alongside my daily repertoire of responsibilities, and I wrapped up the work day craving something different from the previous night’s FiDi excursion. So, my coworker and I headed to a sound bath for a new age-y night of laying on the floor surrounded by strangers as percussive instruments designed to inspire a meditative state were played around us. Like I said, pretty opposite from overpriced cocktails off of Wall Street.

Laying on the floor in my suit, I had the thought that, as a human species, it’s pretty strange we feel the need to signal our value to others via what we wear, and that it’s unfortunate how many people feel this value isn’t something that’s automatically conferred to them just by virtue of being a human being. Are power suits then, at their core, simply an exercise in psychological peacocking? Or was that just the incense talking? Who's to say. 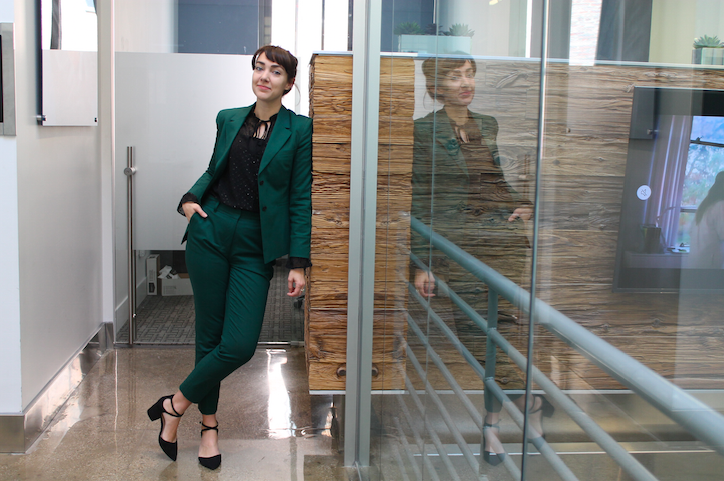 For the final day of my power suit week, I once again opted for the green M.M. LaFleur pant suit, which had rather quickly become a favorite, along with a sheer blouse from ASOS that felt vaguely Victorian. I was leaving work early to meet my best friend from the airport, and we weren’t likely to drop by my apartment before our evening plans began. Meaning, this would also function as my Friday night look.

As I went about my work day, though, I realized not only that I didn't mind the idea of dancing in my power suit later (that, in fact, sounded pretty ideal?). I also realized that I’d miss these suits come next week.

Is what I ordinarily wear to work technically comfier than full-on suit getup? Yes, it is. But something about being so intentionally put together throughout the week did spill over into feeling a bit more put together in my life overall. I sat a little straighter. I spoke a little more firmly. And I had more faith in the idea that what I was doing and how I was contributing at any given moment during the week was enough. The objective value of those contributions didn't change, but my relationship to the idea that what I was doing was either A. insufficient or B. perceived as such by others did. I eased up on myself a bit.

The weirdest part, though? By the end of the week, even the heels stopped hurting.