For many, the Great Resignation tells a story of employees reclaiming their power. Professionals are learning what they truly want from their career and leaving their current jobs to go get it. Some want to change titles, sectors and industries; others want to move out of the office and into full-time remote work.

There’s another, not-so-pretty side of the Great Resignation: employees who are forced to quit because of toxic bosses and toxic work environments. As more people quit and change careers, some companies are left short-staffed with increased workloads. The burden often falls on other workers, who are taking on more hours and more responsibilities with less and less support.

When these employers show their true toxic colors, some employees aren’t sitting back and quietly taking on the extra, often outrageous demands. Cue the viral screenshots that expose these bosses — and the employees who rage-quit their ways out of toxic situations. 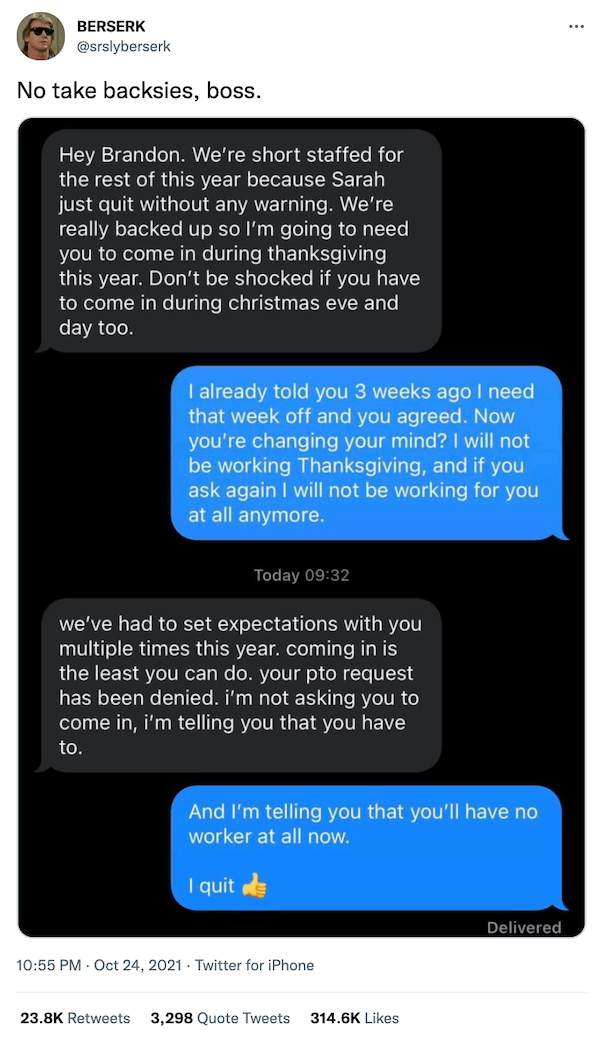 2. The boss who instantly regretted their toxic behavior.

3. The one who threatened their employee's health insurance.

These screenshots went viral on both Twitter and the subreddit r/antiwork. In the following days, tons similar screenshots have gone viral, but with questionably fake back-and-forth text messages.

While fabricating workplace drama may seem fun for some, toxic bosses are real — and sometimes their outrageous behavior is downright unbelievable.

What’s your no. 1 piece of advice for quitting a job with a toxic boss? Share your answer in the comments to help other Fairygodboss'ers!