Mystery Woman
Tell us more for better jobs, advice
and connections
YOUR GROUPS
Discover and join groups with like-minded women who share your interests, profession, and lifestyle.
COMPANIES YOU FOLLOW
Get alerted when there are new employee reviews.
YOUR JOB ALERTS
Get notified when new jobs are posted.
Better Allyship

This moment in history requires a lot from us. As white folks, that means so many things beyond simple solidarity. It means action — taking concrete steps to educate ourselves and others about the experiences of BIPOC in this country and the privileges that have buffered us from being subjected to or even aware of those realities. It means donating to organizations that are doing important anti-racism work and supporting Black-owned businesses. It means having difficult conversations, including with ourselves about the moments where we’ve shown complacency toward the abuse and oppression of BIPOC. It means listening. It means showing up for Black folks in every way we can, while taking care not to center ourselves in those exchanges.

One way you won’t be showing up for and supporting Black folks, including your colleagues of color, is by expressing any of the following things.

The activist and academic Rachel Cargle put this well: “That is in all actuality wildly offensive that our pain is so far off your radar that the mention of it shocks you. It’s actually hurtful to know that the news that’s been keeping me up at night hasn’t even been a topic of conversation in your world.”

In reality, we’ve known for quite some time — since the dawn of policing systems in this country, in fact — that Black people are subjected to violence and brutality from the police in a way that white people aren’t. In Minneapolis, where George Floyd was murdered, for instance, the city’s police force uses force against Black people at seven times the rate it does against white people.

The ongoing oppression, violence and the threat of violence that Black people face in this country is many things. But to call it shocking is directly a byproduct of having the privilege not to face this as part of your daily lived reality. As white people, we should absolutely be interrogating that privilege within ourselves and within the systems that were designed to benefit us. But think twice before expressing your horror or dismay to your colleagues of color; they’re all-too aware of how awful everything is, and now isn’t the time to be forcing your ultimately unproductive exclamations of shock onto them.

As Danielle Cadet explained in an essay for Refinery29: your Black colleagues, way more than likely, aren’t OK right now. That’s a given. Wanting to express support — appropriate examples of which are included below — is one thing. Posing questions in a way that essentially asks to mine your colleague’s personal trauma is another. 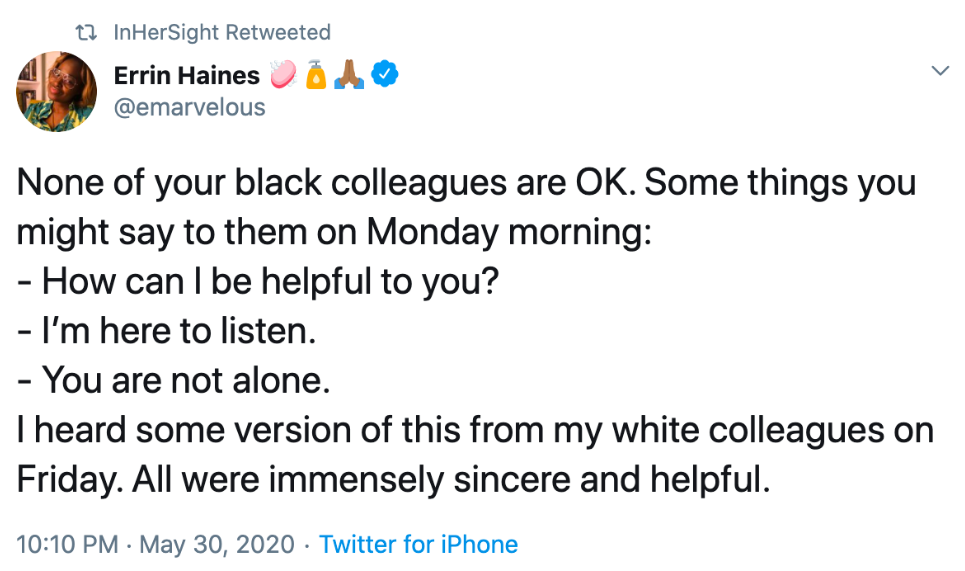 3. “Can you explain this element of what’s happening to me?”

The onus is on us as white people and as allies to take the initiative and learn for ourselves what’s happening. Read essays and books written by people of color. Attend a virtual training on the history of racism and relevant anti-racist efforts. Follow activists of color on social media who are using their platforms to speak out about what’s happening.

Just because you want to be informed doesn’t mean you can expect to pick the brains (and the traumas) of the people of color in your life and demand from them psychologically and emotionally taxing unpaid labor.

A tip: If you're looking for a good place to start and interested in learning from and financially supporting a WoC educator — one who has dedicated her platform to these issues of her own volition and not simply because of your need — Rachel Cargle's The Great Unlearn is an excellent initiative with a monthly, self-paced syllabi for unpacking racism.

3. “I had no idea that racism was still so prevalent. I personally don’t see color.”

There is A LOT out already there on the reasons “I don’t see color” is at best an unhelpful statement, and at worst another form of erasure and disrespect to BIPOC communities. Writing for Ravishly, Leolin Bowen said that when she hears this statement as a woman of color, what she really hears is:

You might think you’re saying this with good intentions. But impact matters more than intention. Just don’t say it.

The short answer is: no, you don’t. As white people who haven’t spent our entire lives facing the same systemic barriers, discriminations and forms of oppression that BIPOC have, we can't understand. This isn’t about us "understanding" in this sense . It’s about listening and committing ourselves to taking the concrete actions that will make this world a fairer place for BPIOC.

5. “I support Black Live Matter, but don’t you think these protests have gotten out of hand?”

If you’re a white person who’s more concerned with the form that today’s protests are taking than you are with the violence against Black people that led to these protests, to put it not-so-delicately: you’re part of the problem. As the author Jane Borden put it: “Here’s an example of how white privilege sounds. You keep saying, ‘It’s horrible that an innocent Black man was killed, but destroying property has to stop. Try saying, ‘It’s horrible that property is being destroyed, but killing innocent Black men has to stop.’ You’re prioritizing the wrong part.”

What can I say?

To once again refer to the leadership of Rachel Cargle, it's better not to say but to do. Check in with your Black colleagues to see if there's any work you can remove from their plates right now. And then once you've done that, apply yourself in the way that matters most: through tangible actions. 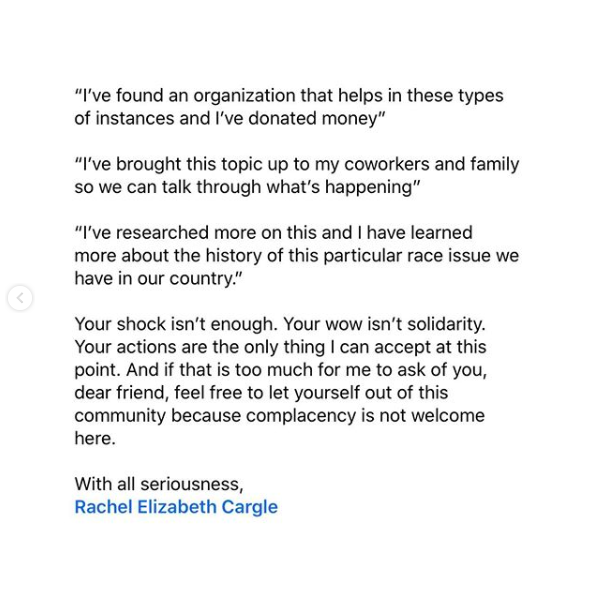