Mystery Woman
Tell us more for better jobs, advice
and connections
YOUR GROUPS
Discover and join groups with like-minded women who share your interests, profession, and lifestyle.
COMPANIES YOU FOLLOW
Get alerted when there are new employee reviews.
YOUR JOB ALERTS
Get notified when new jobs are posted.
Lessons From RBG

3 Ways to Ensure You're Heard at Work, Inspired By Ruth Bader Ginsburg

There’s nothing worse than being on a roll in a meeting and then getting interrupted by a colleague. It’s a frustrating experience, especially when it can be categorized as a “manterruption.”

Supreme Court Justice Ruth Bader Ginsburg knew this just as well (if not better) than the average woman in the workplace. In a 2017 interview, Ginsburg discussed unconscious bias and how it leads to major discrimination against women.

Ginsburg gave an example of an oral argument, when she and Justice Sandra Day O’Connor were both on the bench. Ginsburg assumed that O’Connor was done speaking and interjected. “I thought that she had finished, so I asked a question,” Ginsburg said. “Justice O’Connor said, ‘Just a minute, I’m not finished.”

Though it was a small interaction between two colleagues, it became a major media event. The next day, USA Today ran a story about the exchange: “Rude Ruth Interrupts Sandra.”

Not only did Ginsburg apologize to O’Connor, who told her not to worry and that “the guys do it to each other all the time,” but Ginsburg advocated for herself when a reporter later confronted her about the incident. Ginsburg said she asked the reporter if he noticed her male colleagues constantly interrupting each other. 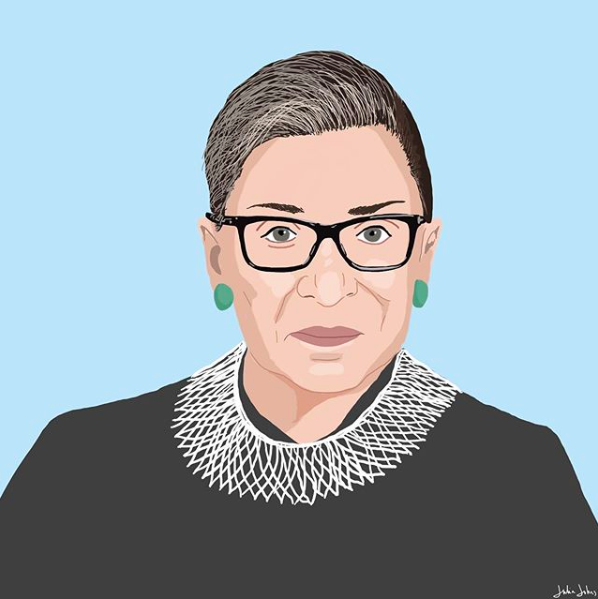 “He watched for a month,” Ginsburg said. “Then he came to my chambers and said, ‘You know you’re right. They do interrupt each other all the time, but I never noticed it.”

Even though manterruptions are annoying and can be detrimental to a professional woman’s authority, there are strategies you can use to shut down manterruptors (and the people who try to convince you that they’re not a big deal). Here are some RBG-inspired ways to make sure you’re heard at work:

A Northwestern University study on oral arguments showed scientific proof that female Supreme Court Justices are interrupted more. “We find that judicial interactions at oral argument are highly gendered,” the researchers wrote. “With women being interrupted at disproportionate rates by their male colleagues, as well as by male advocates.”

When Ginsburg and other female justices used polite language, like “sorry,” “may I ask” and “excuse me,” they were interrupted much more frequently.  However, the study also showed that in response to this — Ginsburg changed the way she spoke. “Ginsburg appears to transition to a more aggressive style of questioning,” the researchers pointed out. “And she is not interrupted nearly as frequently.”

2. Advocate for more women on the team.

Ginsburg speaks on legal matters and gender equality regularly. Though she personally doesn’t get to decide which justices join the Supreme Court, she is public about wanting as many women on the bench as possible. When asked when there will be “enough” women on the Supreme Court in 2012, Ginsburg gave her now iconic response:

“I say, when there are nine,” she said at the 10th Circuit Bench & Bar Conference. “There have been nine men, and nobody’s ever raised a question about that.”

Regardless of whether you’re on the Supreme Court bench or sitting around a conference room table, having more women in the room is always a good idea. Together, you can promote each other’s ideas, stand up against “hepeating” and invite female coworkers to finish their statements when they get interrupted. Make an active effort to bring in female employees at all levels of your organization, and the results will speak for themselves.

3. Stand up for yourself.

Despite their ideological differences, Ginsburg was a close friend of late Supreme Court Justice Antonin Scalia. They disagreed on many items, but remained “best buddies” (and those are Ginsburg’s words!) throughout their career, even once going on vacation together.

Ginsburg’s friendship with Scalia reminds us that it’s important to get to know people on the other side of the table. If you find yourself consistently interrupted by a male colleague, ask him to coffee so you can share your concerns. It’s possible that he hasn’t noticed and will appreciate you bringing the matter up in private. If the discussion grows confrontational and you feel that you need to get a supervisor involved, you will have at least advocated for yourself by making the effort to address the issue on your own.

You shouldn’t be expected to solve the manterruption problem, but until men start understanding their own behaviors and how they affect women at work, these strategies are a good way to get started. RBG would be proud!