How Square Is Changing The Game For Women Engineers

Engineering may be a field that’s traditionally dominated by men, but Square’s community of women engineers – called WomENG – is a force to be reckoned with. Alyssa Pohahau, who co-founded the group, recalls that what started in early 2015 as an email group gradually evolved into a slack channel where dozens of women engineers connected with each other. Eventually, the virtual meetings grew to include casual lunches and roundtable discussions, and today, Square’s WomENG group is a major presence at the company that hosts a variety of events and programs.

Women engineers at Square are welcomed into the community from day one. As part of Square’s onboarding buddy program, new hires are matched with a woman engineer at the company who serves as an informal mentor.

Annie Zhou, who joined WomENG when she started at Square, remembers a community member reaching out to her on her first day of work. “It was really nice. Since I was new, someone in the program offered to get lunch with me and help me out.

“I feel like this program has been a way to meet friends and network. It’s a great support system.”

The group’s creators are spreading the love even beyond Square; they’ve written a handbook, published on Github, to guide other companies interested in starting their own community for women engineers.

WomENG’s Programs and Events Are Continuing to Grow

Since the fall of 2015, WomENG has been organizing quarterly Hear & Now events, each of which features five speakers – one from Square and four from other companies – who discuss a variety of technical topics. The programs are designed to be inclusive; women engineers and allies are welcome to attend.

Marie Chatfield, an engineer at Square who currently leads the Hear & Now events, explains that the discussions serve as “a space for people to speak up who haven’t before. We want to make sure we give them the resources to do that.”

After attending a diversity conference, Marie was inspired to adapt the events to make them even more inclusive. Whereas the events used to be marketed toward women engineers, “we’re opening up the space for anybody who identifies as marginalized to speak – including women, non-binary people, and men,” Marie says. “We’re not going to necessarily ask people to tell us why they feel marginalized, but anyone who feels underrepresented has a space to speak.”

Ameya Acharya, an engineer who started working at Square this past September, worked with Marie to propose these changes. “Everyone was super receptive,” she recalls. “We talked to people on the communications and people teams just to make sure it was possible – but the community is definitely open to changes in the way things are done.”

Alicia Burt, who leads Diversity & Inclusion at Square, says Square has long been sensitive to where people might fall on the gender spectrum. “We recognize that employees don’t just fall into the categories of male and female, which is how companies tend to identify and recognize their employees.

“We’re really focusing on inclusion right now,” she added. “Companies often talk about diversity and their hiring metrics. But if they do hire diverse candidates – and those candidates [start working] and don’t feel like they’re included – it’s sort of all for naught. So we’re really focusing on programs and HR benefits to make sure we’re building the most inclusive culture possible.”

To make the Hear & Now events even more accessible, organizers are working to change the timing of them so that parents have an easier time attending and bringing along their children if they’d like to.

“I see the community being truly about inclusion,” says Jeanette Ercila, People Technology Lead at Square. “As a non-engineer at Square, I see a very clear call-out [from the WomENG community] for allies and collaboration with other communities.

WomENG’s roundtable events also serve as a safe space for employees to collaborate and seek advice; whether participants are wondering how often they should be interviewing or what steps they should take to grow their career, they can speak confidentially. Annie said she attends the events to ask questions and make friends.

Square is Committed to its Employees’ Professional and Personal Growth

Ameya recalls that when she first started her job, she accidentally walked in on a meeting among women who lead WomENG. “They were really welcoming, so I started just going [to the leadership meetings.]”

Now, within her first year of employment at Square, Ameya’s in charge of the buddy program and has been involved in planning other events. “I think the WomENG community is really special at Square because it’s really easy to get involved in leadership here,” she said, adding that each quarter the community tries to rotate the leaders of each program.

Alicia reiterates that leaders at the company are receptive to all voices. “If [Ameya] has an idea for a change to a community or group or program, she can speak up and really make a change herself.”

Jeanette credits the WomENG community with helping people grow both professionally and personally. “I’ve seen people who early in their career have fears like public speaking or being in leadership roles,” and by participating in WomENG, “a lot of those fears break down in very tangible ways. It’s a testament to the community.” 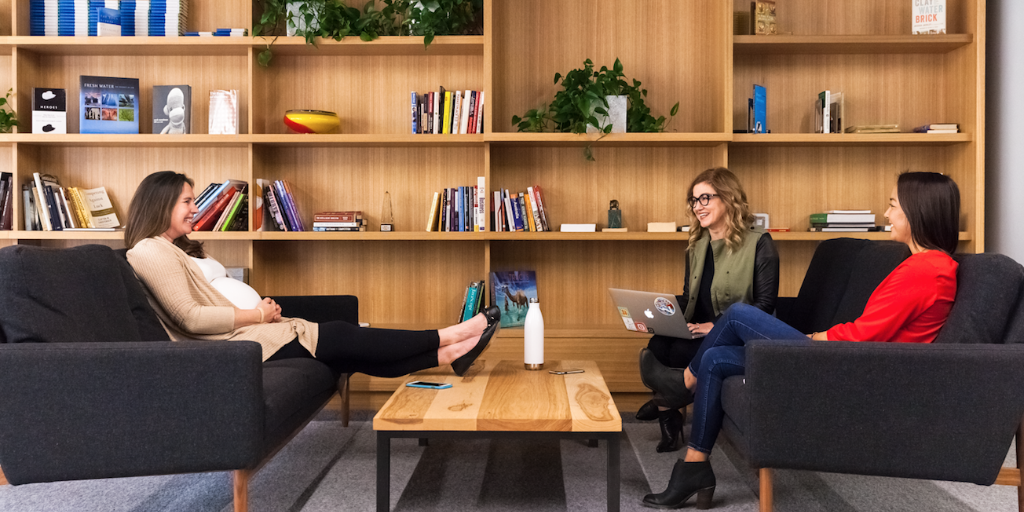 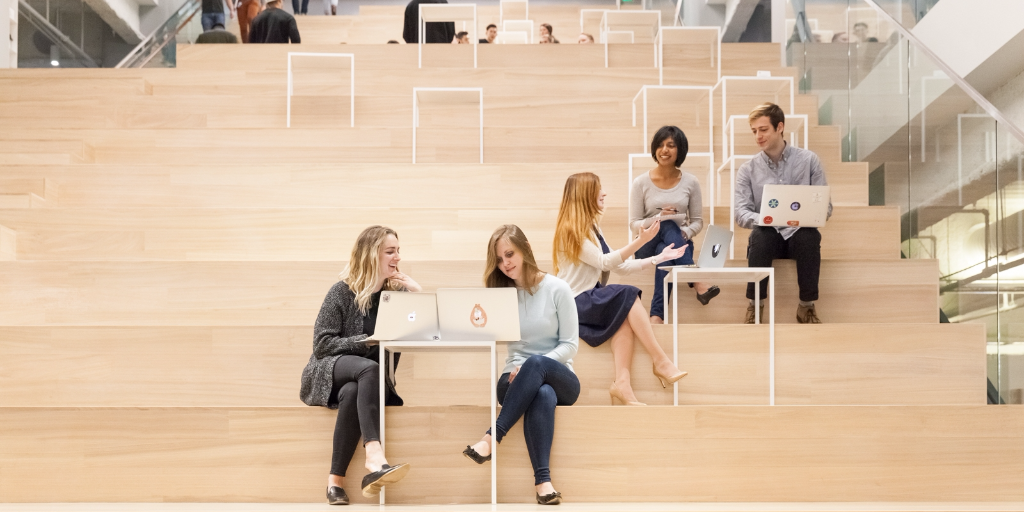 Above: WomEng Community members and allies collaborating at Square. The stairs serve as an informal meeting place and popular spot to gather for a quick sync. Photos courtesy of Square