Mystery Woman
Tell us more for better jobs, advice
and connections
YOUR GROUPS
Discover and join groups with like-minded women who share your interests, profession, and lifestyle.
COMPANIES YOU FOLLOW
Get alerted when there are new employee reviews.
YOUR JOB ALERTS
Get notified when new jobs are posted.
The Twitter-Sphere

Not Everyone Is Buying the 'Millennial Burnout' Fad — Including These Millennials

Millennials have been notoriously dubbed the "Burnout Generation," and while many millennials agree that they've optimized themselves to death, many others point out that the argument is exactly why other generations have little patience for their generation.

"We’re spoiled, entitled, lazy, and failures at what’s come to be known as 'adulting,' a word invented by millennials as a catchall for the tasks of self-sufficient existence," Anne Helen Peterson writes for Buzzfeed. "Expressions of 'adulting' do often come off as privileged astonishment at the realities of, well, life: that you have to pay bills and go to work; that you have to buy food and cook it if you want to eat it; that actions have consequences. Adulting is hard because life is hard — or, as a Bustle article admonishes its readers, 'everything is hard if you want to look at it that way.'"

Peterson adds that millennials love to complain about other millennials giving them a bad name. And while she does the same, she admits that she's, too, found herself "in deep in a cycle of a tendency, developed over the last five years, that [she's] come to call 'errand paralysis.'" She’d put something on her weekly to-do list (as simple as getting knives sharpened, registering her dog for a new license, scheduling an appointment with her dermatologist or vacuuming her car) and it’d roll over one week to the next, haunting her for months.

"For the past two years, I’ve refused cautions — from editors, from family, from peers — that I might be edging into burnout," she writes. "To my mind, burnout was something aid workers, or high-powered lawyers, or investigative journalists dealt with. It was something that could be treated with a week on the beach. I was still working, still getting other stuff done — of course I wasn’t burned out. But the more I tried to figure out my errand paralysis, the more the actual parameters of burnout began to reveal themselves. Burnout and the behaviors and weight that accompany it aren’t, in fact, something we can cure by going on vacation. It’s not limited to workers in acutely high-stress environments. And it’s not a temporary affliction: It’s the millennial condition. It’s our base temperature. It’s our background music. It’s the way things are. It’s our lives."

The viral Twitter thread sharing Peterson's Buzzfeed piece quotes her: “Why am I burned out? Because I’ve internalized the idea that I should be working all the time. Why have I internalized that idea? Because everything and everyone in my life has reinforced it — explicitly and implicitly — since I was young." And Twitter users have reacted.

Many agree with Peterson, adding that they, too, feel burnt out.

"I'm starting to feel burnout," one user wrote. "I have a pretty good govt job that pays well, but I still have to work two to three side jobs to keep up. While my friends are having brunch and busy dating I'm just trying to pay my loans back." 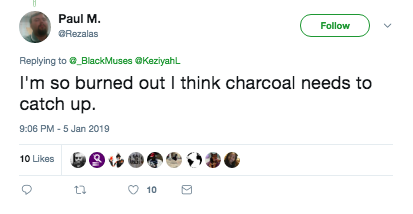 In fact, people of all generations add that they feel burned out, and don't believe that burnout is a problem only millennials face but, rather, it's a societal issue.

"I'm not a millennial but this hits very close to home," one person tweeted.

"Other generations burn out — they just didn't have a cute word for it," another Twitter user commented.

Another shared: "I hit burnout at 40 when I realized there was no end and no reward. I sold all my stuff and traveled. Now I'm just getting back into things but with a refreshed mindset watching plenty of others wander aimlessly and struggle to admit they are at their limits."

Many working people face burn out. In fact, a recent Gallup study of nearly 7,500 full-time employees found that 23 percent reported feeling burned out at work either very often or always, while an additional 44 percent reported feeling burned out sometimes. The study respondents cited unfair treatment at work, unreasonable deadlines, unmanageable workload and lack of support from managers as to why they're feeling burnt out, in addition to the stress of 24/7 access to work via emails and text messages during off-hours.

Still, a wealth of studies suggest that millennials, who make up more than a third of the workforce in the United States, are notorious for burning out at faster rates. According to the American Psychological Association, millennials are the most stressed-out generation ever, and millennial women (especially those working in journalism, STEM and medicine) are hitting career burnout before age 30.

As such, millennials have become known as "job hoppers."

The number one reason millennials leave their jobs, research commissioned by Jive Communications in Utah found, is because they don’t like the atmospheres of their offices — a mixture of unflexible working hours, no options to work remotely, slow technology and close-minded company cultures. In fact, the study found that the average millennial has already had three jobs, and the majority of them start to look for another job before they hit the three-year mark in their current positions. Another 24 percent are only at a job for six months to a year before they start hunting again, and 30 percent start looking between a year and 18 months.

In fact, Monster.com commissioned a “My First Job” survey among graduates 18 to 34 years old and found that 29 percent of candidates actually quit their first jobs before hitting their one-year marks. While they do so for a gamut of reasons, a large majority of them simply feel unprepared. Sixty percent of the respondents said that they left for reasons regarding professional growth — there were better work opportunities elsewhere. Meanwhile, 16 percent felt like they could have been compensated with higher salaries.

While  Forbes reported in 2017 that millennials aren’t "job hopping;" rather, they’re "jumping at opportunity," millennials have earned a bad rep for moving around so much, often called "lazy" or "entitled" and, therefore, unfit for the workforce.

"Too many of them grew up with — not my words — failed parenting strategies," Simon Sinek, an organizational consultant, author and motivational speaker has said. "They were told that they could have anything they want in life, just because they want it."

Many of the Twitter users commenting on the viral thread argue that Peterson's post, then, is exactly the "problem" with millennials.

"Serious? I started working & making money at around age 11, which included a seven-day a week newspaper route and have continued since... as have many of my peers," one Twitter user wrote. "'Millennials' have a very long way to go before claiming 'burn out' from work. No Whining..."

Another wrote: "Thank you to the writer for exposing why there are so many lazy, entitled socialist millennials."

"Are you actually having a pity-party about working?" another questioned. "You just summed up the bizarre mentality of millennials. Work at your own pace, but don’t look for handouts because you don’t realize that WORKING is the natural state of mankind and the animal kingdom in order to survive."

And a millennial shared this insight: "I don’t consider us as a whole 'lazy,' but I definitely feel like many millennials act like their issues are theirs and theirs alone. Gen Xers can probably relate to burnouts as well, and most of them didn’t get the opportunity to live at home with their folks."

Despite the fact the millennials are accused of complaining about "adulting" and aren't considered a loyal employee base, studies show that they do have an impressive work ethic. According to research found in a survey by Project: Time Off, for example, millennials identify as "work martyrs" and, as such, they don't even take PTO. Unlike their older counterparts, they feel guilty about requesting that time off and are determined to show their dedication, not wanting to be considered replaceable. If anything, millennials tend to obsess over work too much, which takes a toll on their work-life balance, according to the Harvard Business Review.

However you feel about the millennial work ethic, however, the fact of the matter is that millennials (and other generations) are burning out. And this Buzzfeed articles serves as a wake-up call for society to question why there is so much burn out.