Mystery Woman
Tell us more for better jobs, advice
and connections
YOUR GROUPS
Discover and join groups with like-minded women who share your interests, profession, and lifestyle.
COMPANIES YOU FOLLOW
Get alerted when there are new employee reviews.
YOUR JOB ALERTS
Get notified when new jobs are posted.
Pronouns

5 Ways to Convey Your Pronoun of Choice At a New Job, From People Who've Been There

Society is starting to finally recognize that gender is a non-binary spectrum, which means that we're not relegated to just “male” or “female.” Many of us choose to identify with non-traditional pronouns, gender-neutral pronouns, multiple pronouns or no pronouns at all.

Approximately 1.4 million Americans identify as transgender, and a reported 12 percent of millennials identified as something other than male or female, according to a March 2017 study. In a 2015 national survey, some 33 percent of transgender individuals said that, if permitted the choice, they would prefer not to be assigned either gender designation.

But, when starting a new job, it can be uncomfortable to share one's pronouns with a new employer who might make assumptions or, worse, discriminate. Non-binary workers have reported feeling pressure at their jobs when it comes to their lack of gender designation — 23 percent of those polled by The Williams Institute at the UCLA School of Law said that they purposefully hid their non-binary status at the workplace. And, of those who chose to go public, almost 20 percent believed to have lost a job because of their status and 90 percent believed to have suffered some form of job bias, discrimination or harassment.

What Are My Pronouns?

You may use whatever pronouns you wish. Many people use the following pronouns, according to The University of Wisconsin-Milwaukee's Lesbian, Gay, Bisexual, Transgender Resource Center: 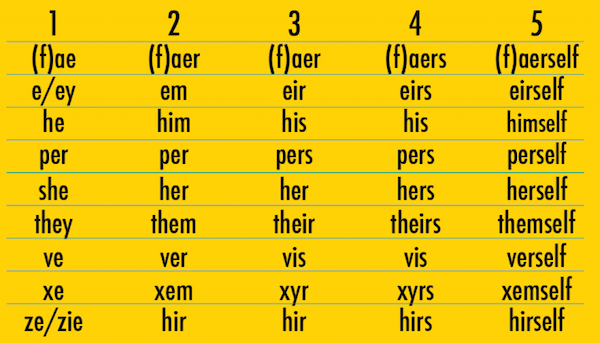 Some people choose to switch hir(s) and hirself with zir and zirself, as well. What does zie and zir mean? Like (f)ae and (f)aer, they are neo-pronouns, so they are gender neutral.

So how do you have that conversation with your new boss? I asked individuals who use non-traditional pronouns to share how they've shared theirs in previous jobs. Here's what they had to say.

1. Be Your Own Advocate

"I've been out as non-binary for more than 10 years, around eight of them openly non-binary in the workplace," says Jordan, who asked that I only use their first name. "I work in non-profit marketing and I use they/them pronouns. Notably, I live and work in New York City, where the law protects transgender and gender non-conforming employees. Workplaces in NYC are not allowed to discriminate against employees based on gender identity or expression, and intentional or repeated misgendering is explicitly categorized as harassment. Despite these laws, I've had a very difficult time navigating pronouns in the workplace, and know that non-binary people living places without legal protection often face far worse situations.
They have worked at three full-time jobs since graduating college and, at each one, put a lot of effort into communicating their pronouns. At each job, they said that there was no formal process in place for communicating gender identity or pronouns, so they had to pave their own path and advocate for themselves. In the absence of policy, they said they've had one-on-one conversations with managers, and then informed other staff through either email or bringing up their pronouns at group meetings.
"Generally, my experiences with individuals have been overwhelmingly positive," they said. "Most colleagues are more than happy to respect me and my gender identity, and quickly adjust to the new language. I find that most people are genuinely happy to be respectful and to learn about a topic they may not have previously had exposure to."
However, they have also consistently come across problems with their pronouns not being respected by certain individuals. At one workplace (working for an LGBT organization, no less), the lead rabbi consistently misgendered them for years, and the organization refused to update their paperwork and documentation, even after their name was legally changed.  At another workplace, after informing staff of their pronouns through email, they were chastised by management for giving people the "directive" of using their pronouns, and told that no one is required to use their pronouns, in direct conflict with the law.
"The undercurrent of my experiences is that, while many people are accepting, that can be overshadowed by one or two transphobic people, and that policies and procedures are necessary to create safe work environments for non-binary people," they said. "Had any of the offices I worked at had policies or training for staff, or even simply communicated the law and their expectation that staff use my pronouns, it would have gone a long ways towards making me feel safe and affirmed in the workplace."

2. Make it Known That Your Pronouns Are Not Necessarily Just a "Preference"

"My pronouns are she/her(s)," says Alison Carville of Carville Communication Consulting. "I do identify as a cisgender female. In my life and times I was looking for employment, no one has had to guess or risk mis-gendering me. But I have many friends who identify as genderfluid and transgender. Many find the term 'preferred pronouns' to be misleading, as the word 'preferred' means you like something better than another. It's like preferring beef to chicken, if you eat meat.
"Pronouns are personal, and trans* and genderfluid individuals have the right to be called by their pronouns, not as a 'preference.' My intention is to come across as sincere, and take some burden off of trans*-identified people to let [people] know how unintentionally harming word choice can be."

3. Be Open from the Start

"I've realized that most people are respectful of my pronouns (she/her/her's) and don't want to make me feel uncomfortable, it's just that most of us are wired to 'assume' someone's pronouns based on the way they look," says Bethany, a transgender woman still going through her transition. "I find that if I'm open and honest from the start, the genuine people around me will make the effort to call me by the pronouns that reflect who I am, and they are happy to do so. I usually just casually say, 'Hey, by the way, these are my pronouns and I appreciate if you use them when referring to me,' as soon as I'm introduced to someone new."
For those who make no effort, she says she tries to keep their working relationship as cordial as possible, but she also tries not to let their ignorance affect her or her work.
"I've been fortunate enough to have never worked for an employer who didn't respect my gender identity, though I have run into some colleagues who seemed quite careless about it," she says.

"I share my pronouns in a variety of locations: under my name, on their own line, on my CV and the same in all headings or signatures on documents such as cover or recommendation letters," says An Sasaia, a PhD student in trans*/queer studies who serves on the board of KSTEP, the Kansas Statewide Transgender Education Project. "I remind my advisors which pronouns to use in their letters, and I often include references to my non-binary gender and pronouns in the letter with a statement such as, 'As a nonbinary instructor, who uses the pronouns they/them and ze/zir," and so on."
Sasaia also mentions "them" early on in conversations and interviews by asking for a pronoun exchange, they say.

5. Be Confident in Who You Are

"I always just tell them straight away, 'My name is Brenna and I use the pronouns they/them/their's,' and then I ask them for their pronouns so I make sure not to assume either — if I don't want people to assume my identity, I want to give them the same respect," says Brenna, a New York-based queer rights activist who uses the pronouns they/them/their's.
That said, they admit that there will always be people who slip up and that there will always be people who ignore others' pronouns, but "you have to keep confident in who you are."
"If you find that there are constantly coworkers or managers ignoring your pronoun requests, it may constitute as discrimination in the workplace," they say. "I personally don't agree that we should have to quit and find a new job, because the burden shouldn't be ours, but if you feel uncomfortable you should report it to HR and try to do something about it. This is who you are, and that's a big deal. Don't let it fall to the wayside. Be confident in your pursuit of equality."