The Motherhood Divide In The Workplace: It's Not As Big As You Think

Last Sunday was Mother’s Day, and only my second one as a mom. In other words, I am still new enough to motherhood to have vivid memories of my childless days.

Recently, there has been a lot of discussion about the divide between working moms and childless women in the workplace. For starters, online hostilities seem have broken out between moms and non-moms over a new novel by Meghan Foye. Called “Meternity”, the book focuses on a childless woman who so badly wants self-focused time away from her career that she fakes a pregnancy in order to take a maternity leave.

The uproar by moms was predictable, and judging by the media coverage, maybe even a calculated marketing ploy. Comparing maternity leave to a career sabbatical is a poor analogy given that a typical maternity leave looks more like an un-showered, sleep-deprived fog of identity-crisis and endless diaper-changing than anything resembling time off for self-fulfillment. On the other hand, many commentators rightly point out that childlessness doesn’t mean the lack of demanding, important responsibilities, whether they involve family care-taking or other things.

Motherhood certainly changes your life, forever. Last week I wrote about the fact that I only really became conscious of my gender at work when I became pregnant. So just how different are moms and non-moms when it comes to issues in the workplace? Is the divide between them really a gulf? We set out to investigate.

According to a survey commissioned at Fairygodboss, we did in fact find differences between what women prioritize in their jobs, depending on their parental status. However, the differences are not as great as you might think.

We asked women, “Apart from compensation, what is the number one thing that will be most important to you in your next job?” Across the board, the number one answer was flexible work hours, followed by opportunities for advancement and promotion, a nice and collegial work culture, and the ability to work from home. 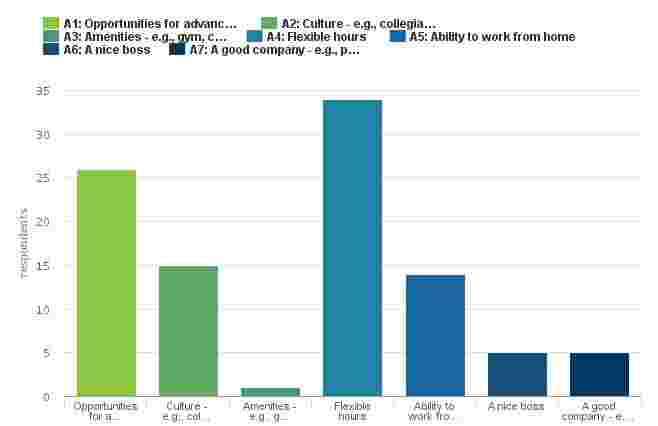 When we looked at the answers that childless women gave, however, we saw that opportunities for advancement and promotion was the top priority, followed by flexible hours and a nice and collegial work culture. 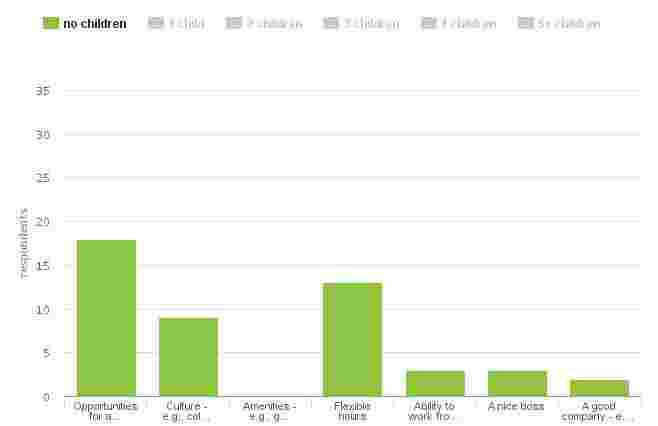 For mothers, on the other hand, flexible hours and the ability to work from home were more important than opportunities for advancement and promotion, which came in third place. 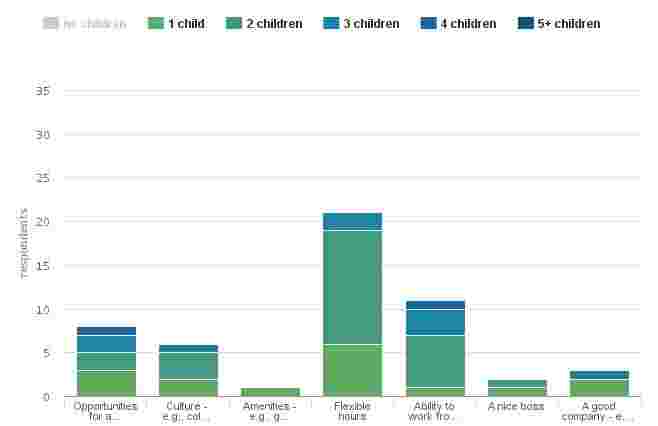 While these results may seem to reinforce damaging stereotypes that hurt women in the workplace (i.e. assuming and treating mothers as less committed, and “mommy tracking” them as a result), what survey exercises that force artificial prioritization fail to capture is the complexity of human desire.

In other words, working moms want both flexibility, and the ability to advance their careers. And childless women want both, too. When push comes to shove, one group may choose flexibility over advancement opportunities (or vice verse), but this is a false choice. In our modern workplaces, which are being reshaped by technological innovation and a focus on results, it’s not clear why one should be at odds with the other. In many jobs and companies, I would argue that no such trade-off exists. Moreover, many employers are working to eliminate this trade-off in order to retain their talent. As an example, one engineering manager recently wrote about her experience at General Electric on our site, saying:

“The company offers a very broad range of career opportunities with its diverse portfolio. There are women at the officer and board levels. We understand that our biggest issue with increasing women in leadership positions is the mid-career opt-out, and we're actively working to fix that...Flexible work arrangements are available, and it's up to me to work out with my manager what makes sense for my role and my personal goals. I feel fulfilled...and I hope to continue on this path for a long time.”

One journalist I know who is a first-time expecting mother recently confessed mixed feelings about how her impending motherhood would change her. She said, “I worry that I will lose my empathy for my childless coworkers” who she acknowledges also have important personal lives, even if not children.

Well, maybe she need not worry. Our data shows that childless women and mothers in the workplace may share more in common than many assume. From what I can tell, it seems both are trying to advance their careers while having the flexibility to fulfill their other responsibilities and interests. Neither group may be able to “have it all”, but they certainly seem to be trying to make the time to “do it all.”

This article originally appeared in Forbes.