Mystery Woman
Tell us more for better jobs, advice
and connections
YOUR GROUPS
Discover and join groups with like-minded women who share your interests, profession, and lifestyle.
COMPANIES YOU FOLLOW
Get alerted when there are new employee reviews.
YOUR JOB ALERTS
Get notified when new jobs are posted.
Watching Our Words

The Problem With Calling Yourself An Ally, According to a Black Activist

As a white person who historically hasn’t done enough to help dismantle systems of racism and oppression in this country, and as someone who deeply wants to step up and do better in this regard, the concept of allyship has been on my mind lately. A lot.

I’m sure I’m not the only well-meaning white person for whom the word “allyship” has loomed large in recent weeks. Against the backdrop of the Black Lives Matter movement and its upswell in demands for deeply overdue change, I’ve found myself asking and attempting to answer: How can I be a better ally? For many of us, this may seem like the most logical place to start: namely, within ourselves and our own personal spheres of influence. But after reading the words of some Black activists on the subject of allyship, I started to realize there was something remiss with my focus on it.

Even the question “how can I be a better ally” asserts the claim that I already am one. And who, in actuality, gave me that title? I did.

This is a problem, in that it suggests the title of ally is one I can simply claim for myself — and not something that A. I have to earn as the result of my ongoing, sustained anti-racist actions and B. has to be given to me by people of color. Not only that, but if my focus remains on how I personally can be a "better ally," at the end of the day, the focus is still on myself. Taking a long look at ourselves, our privilege and the moments where we've been complacent is important work for us to do as white people. But it isn't all of the work.

Below, here are the reasons why allyship shouldn't be the goal, as identified by Melton in her post:

“(Allyship) implies that anti-racism is an identity that can be earned or perhaps even born into, which it is not,” Melton wrote. “This would imply there’s a destination, a start & stop point that you get to in this work, when this is instead a life long journey. Anti-racism is not a noun or an identity, but it is instead a daily & ongoing practice of identifying and eliminating racism from the ‘inside-out’ so that we can live fully in our humanity.”

2. Allies get to determine the conditions of their own allyship.

“The goal is not allyship (because) it comes with too many conditions (that you determine) & implies that this work for you is optional, aspirational, intellectual, for personal development; when it is actually (your) responsibility & for Black liberation," she wrote.

3. Using your privilege “for good” as a tenet of allyship is incorrect.

“Allyship disconnects (you) from the humanity of this work and keeps (you) insulated & protected by the white privilege you wish to ‘use for good’. But that’s also a myth,” Melton wrote. “You can’t use your privilege for ‘good’ (because) that means there’s still an oppressive system that gives you that privilege. The goal is to dismantle the system that gives you that privilege, & being an ally won’t cut it.”

4. Allyship is a performative version of the work you should already be doing.

“Allyship becomes performative far too easily (because) not much is required to call oneself an ally — which means it becomes more about you, than Black lives,” Melton wrote. “This is work (you) should be doing (because) it’s your work to do... (you) don’t need a title, (you) need to get to work… When will the white collective take responsibility for the work that is (yours) to do & w/o needing a title or badge to do it?”

As Melton summed up, the self-proclaimed title of “ally” isn’t what’s actually needed in this moment.

“We need your unrelenting commitment to ending the violence against us by doing the work to ensure we all can live freely in our humanity,” she concluded. “No titles needed.” 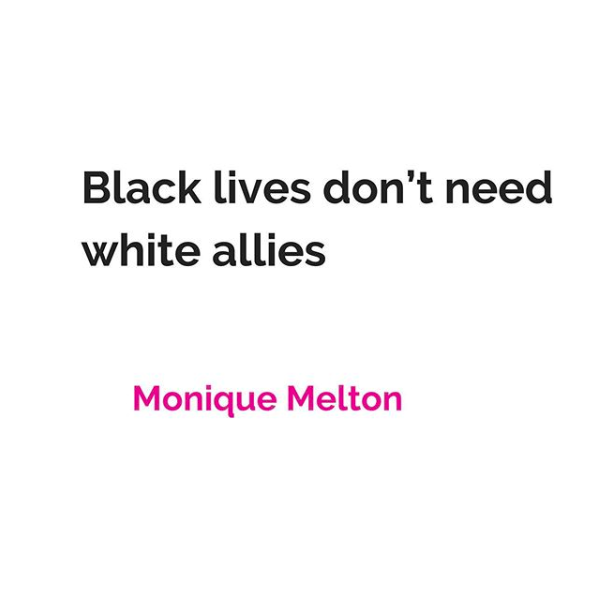 Personalize your jobs
Get recommendations for recent and relevant jobs.
Employer Reviews
US Foods
3.8
I would say that we see a lot of women in our IT...
KinderCare Learning Companies
3.5
KinderCare Learning Companies is a huge advocate for...
Recent Content
You Found Out Your Coworker Makes More Money Than You – Now What?
Be a Force for Good, Conquer New Frontiers and Enjoy the Ride at This Global Tech Company
3 Women Share How a Culture Full of Growth Opportunities and Support Helped Them Move into New Roles