There Are More Female Breadwinners Than You Think

I recently had lunch with a woman working in the financial services industry, who was quite senior in her career. She confided in me that she was struggling with juggling the various home and work responsibilities she had and feeling like she couldn’t optimize either.

It all sounded like a very familiar story. Because of the huge number of women I’ve met through Fairygodboss, I've become accustomed to meeting women who share their difficulties about balancing work and the rest of their lives. Therefore, I nodded my head sympathetically through most of her story. It wasn’t until the middle of our conversation that I realized I’d been an idiot to assume that she was about to tell me she was weighing the pros and cons of “opting out” of the workforce.

In fact, this woman was looking to me for advice about entrepreneurship as a way to control the work-life balance she wanted. Moreover, she was very concerned about entrepreneurship because of the financial risks it entailed. She was looking for advice about work — not about work-life balance. At that point, she felt compelled to explain to me that she was her family’s primary breadwinner.

I walked away from that lunch feeling quite embarrassed with myself. I had not said anything, but she probably assumed that I was making assumptions about her — and the truth was that I had been. I knew that she was married but why did I assume that she might be able to rely on her husband’s income to lessen the financial blow of becoming an entrepreneur? And moreover, why did I assume she was considering dropping out of the workforce in the first place?

This experience inspired me to look into the data. In what percentage of American heterosexual marriages does a woman outlearn her husband? Would you guess 20% or 30%? It’s higher than you might think. 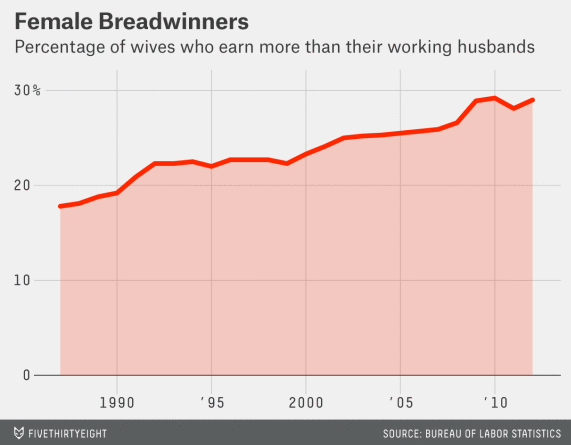 According to the U.S. Bureau of Labor Statistics, the answer is 38%. However, that number does drop to 29% when the Labor Department looks at marriages where both the male and female partners receive pay for their work. In other words, in the 38% figure, the government is counting households and marriages in which only the woman works. And of course, it also leaves out households where people are simply co-habitating as couples (6.5 million of them opposite-sex and an estimated 0.7 million of them, same-sex).

If you look at households with children (irrespective of whether they include a married couple), a record 40% are led by mothers who are either the sole or primary source of income for the family. As Pew Research Center puts it, “These ‘breadwinner moms’ are made up of two very different groups: 5.1 million (37%) are married mothers who have a higher income than their husbands, and 8.6 million (63%) are single mothers. These two groups of women are driving up women’s participation rates in the labor force to over 65%, even if they don’t share much else in common. For example, the married breadwinning moms are disproportionately Caucasian, college-educated and older while single, bread-winning moms are “more likely to be black or Hispanic, and less likely to have a college degree.”

Why are all these statistics important? The growing number of women who are responsible for the financial and economic security of their families matters because managers and colleagues may assume that women don’t want (or need) a promotion as much as a man. It matters because those “reach” assignments, international placements, plum clients and business deals are just as financially important to a woman breadwinner as a man breadwinner. It matters because ventures capitalists and investors often assume a woman may have a financial back-stop, and be less aggressive or willing to take risks. And all of these assumptions hurt not only the women for whom it simply mischaracterizes — but also all the women who may very well have a traditional marriage and household finances, but who nevertheless want the difficult assignment, business deal and promotion just as badly.

I learned a lesson from this lunch. Even those of us who think about and work on diversity issues every day are not immune to making mistaken assumptions. Looking at the data and realizing that we’re inching closer to 50% of households being financially supported by women helps all of us keep some of our important assumptions in check.

0 Comments
Browse recent articles
How Embracing Challenges Leads to a Dynamic Journey With Multiple Careers
Considering a Career Change? Use This 3 Step Guide to Make Sure You're Ready
Advancing Quickly and Always Learning: Exploring My 6 Years of Growth at 1 Supportive Company
How to Ask for a Raise: The Ultimate Guide to Get What You’re Worth
Have You Been Waiting Out a Long Overdue Promotion? Try This Approach to Speed Up the Process
How Northwestern Mutual Helps Me Succeed as a Working Mom
See more
Achieve your career goals.
Be part of the largest online career community for women to find jobs, advice, and support — for free.