What Men Think Are The Top Challenges Women Face At Work

We've previsouly shared that a majority (66%) of men we surveyed do not believe gender bias exists in the workplace and an even larger number (90%) of those men did not believe gender bias existed in their own workplaces. However, even men who reported they do not believe women face bias at work acknowledged that women face certain greater challenges than men at work. The chart below reflects what those perceived challenges are: 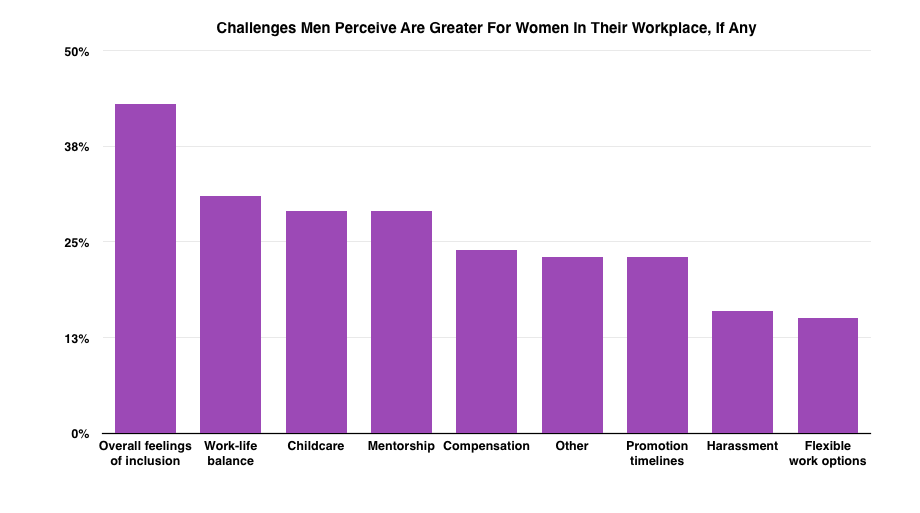 The number one issue men said women faced to a greater extent than men at work were “overall feelings of inclusion”. Forty-four percent of respondents perceived this to be a greater challenge for women than men. While it’s not exactly clear why they believe women feel this way if it’s not due to bias, perhaps this comes down to women simply being outnumbered in certain workplaces, or among the management ranks.

Following feelings of inclusion, men reported that the second and third greatest challenges women face are work-life balance and childcare, respectively. Given that care-taking and childcare are still widely expected to fall on the shoulders of women in American culture, this was not exactly surprising. These two answers may be based on the reality (or even expectation/assumption) that many mothers at work need to juggle family responsibilities differently (or more intensely) than fathers. Perhaps that is even the case for the male respondents in question who are fathers themselves.

What’s disturbing about these differences is not simply that men’s and women’s perceptions don’t align perfectly. It’s difficult, after all, for anyone to put themselves in another person’s shoes. But the data here shows there’s a very significant chasm in understanding between men and women about what issues are the most problematic for women at work. These misunderstandings may impact how male managers manage women, but also the way that well-meaning male colleagues interact with their female counterparts. Not only do a significant number of men and women disagree about whether there’s a level playing field or not at work in the first place, there doesn’t even appear to be common ground as to what the potential issues may be.

What can be done to bridge this gap in perspective between men and women? First, it is important for individual women who are concerned about pay and promotion to understand that their challenges may be far from obvious to others. This may mean that to make themselves clear and achieve their goals, individual women have to speak up more about what they want. Second, employers and managers can listen more closely to employees, instead of making assumptions about what they want and what challenges they feel they face. Finally, women and men should both consider how and why things may appear so different to each other. It may not be easy to talk about gender diversity in the workplace, but honest conversations are an important start.