Who Has More Equality At Work: Blue-Collar Or White-Collar Women?

We all hold assumptions about what certain jobs are like.

Some professions seem exotic and glamorous while others appear to be chock-full of drudgery. One thing that reading thousands of women's jobs reviews at Fairygodboss has done is change some of my ideas about certain roles and employers. You may think you understand what life is like as a marketing manager or barista. Or perhaps you can imagine what life is like as a doctor or retail-cashier. But nothing substitutes for hearing directly from many of the women who live those realities. That's when your ideas start to change.

Last week, the Wall Street Journal published a report concluding that women in white-collar, high-paying professions experienced a larger gender pay gap than women in blue-collar professions. Among the top 10 professions where women’s earnings lagged behind men’s,”doctors, compensation managers and personal financial advisers” were among those showing the widest earnings gaps.” This may have been surprising to some readers. After all, one might have thought that women in white-collar professions with years of training and education would be the least likely group of people to earn less than men.

What else might be different about white-collar and blue-collar women when it comes to workplace experiences? We see that the gender pay gap is pretty much the opposite of what one might initially expect, but what about other aspects of gender equality, work-life balance, and discrimination? We recently conducted a casual straw poll among our newsletter readers asking them which group of women they thought faced more gender inequality at work. This is what they said: 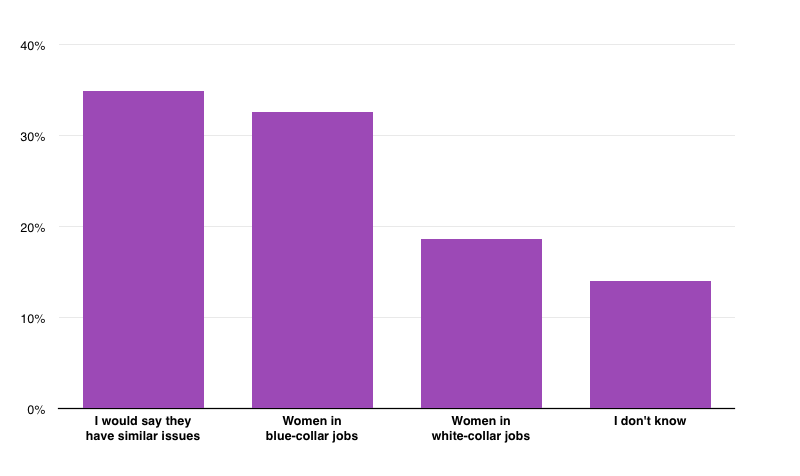 We thought the topic was interesting enough to commission a survey to understand the differences between blue-collar vs. white-collar women. As a proxy for the two groups, we assumed that blue-collared workers were largely hourly workers and white-collared workers were predominantly salaried.  To be sure, there are white-collar professionals that may be paid on an hourly basis (e.g. consultants) and blue-collar workers who are unionized and paid on a salaried basis. While less than ideal, there was probably no alternative definition that would have perfectly captured these two categories of workers.

We found that both white-collar and blue-collar women reported similar rates of sexual harassment at work (approximately 20%), and 2/3 of both groups agreed with the statement that they would work even if they didn’t have to for financial reasons. Encouragingly, about 80% of both the white-collar and blue-collar women we surveyed said they felt work-life balance was possible in their jobs. 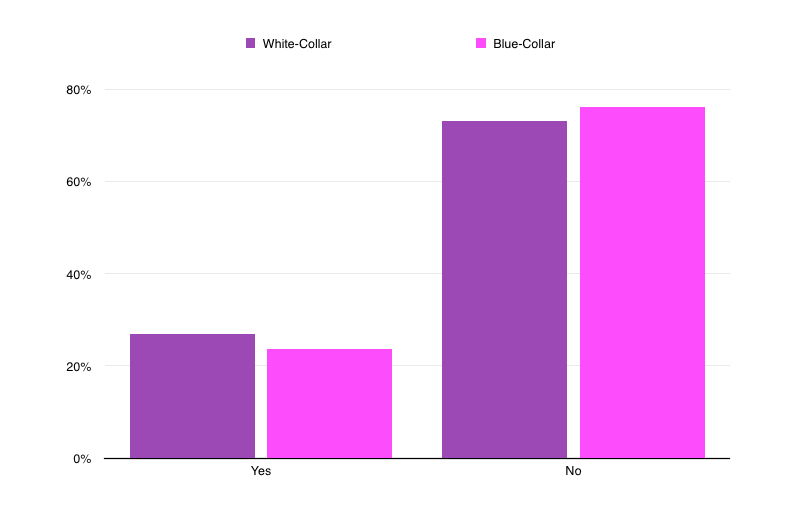 Fairygodboss Survey Question: "I have experienced sexual harassment at work" 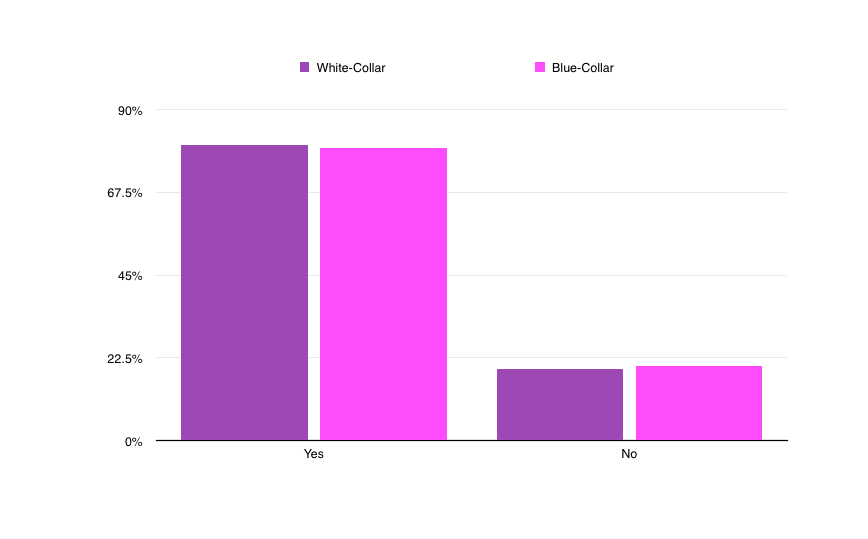 Fairygodboss Survey Question: "Work-life balance is a possibility in my job" 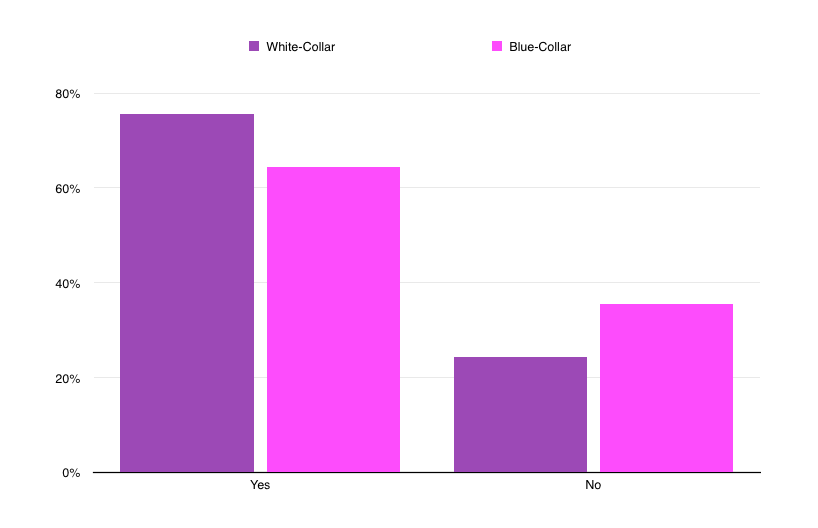 Fairygodboss Survey Question: "I would work even if I didn't have to."

That’s where the similarities between the two groups ended, however.

Differences Between White-Collar and Blue-Collar Women

Generally, white-collar women were more likely to say they believed they received equal pay compared to their male colleagues. 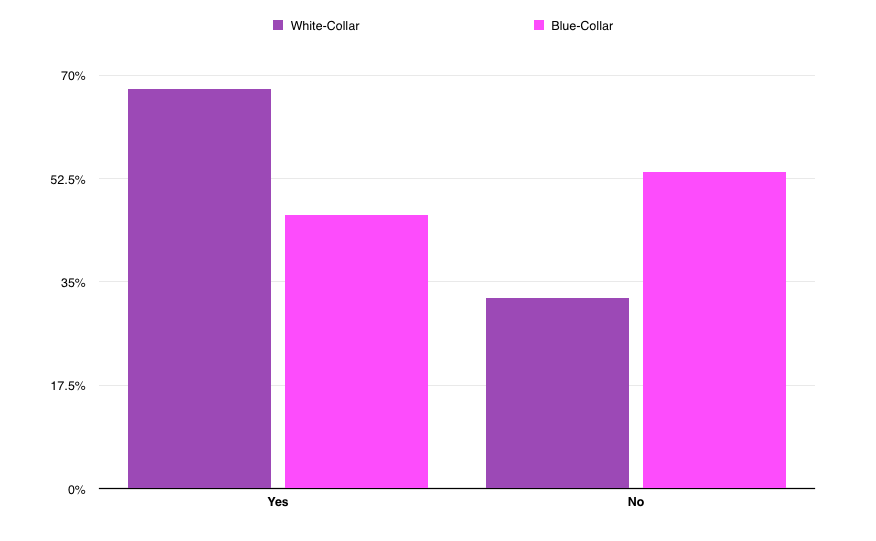 Fairygodboss Survey Question: "I believe that women are paid equally to men where I work."

However, they were also less likely than blue-collar women to believe they had an equal shot at promotion.

Or perhaps white-collar women believed they had difficulty getting a promotion because they simply didn’t see many examples of other women in leadership. After all, as a group, white-collar women were less likely to be happy with the numbers of female leaders at their companies than blue-collar women. 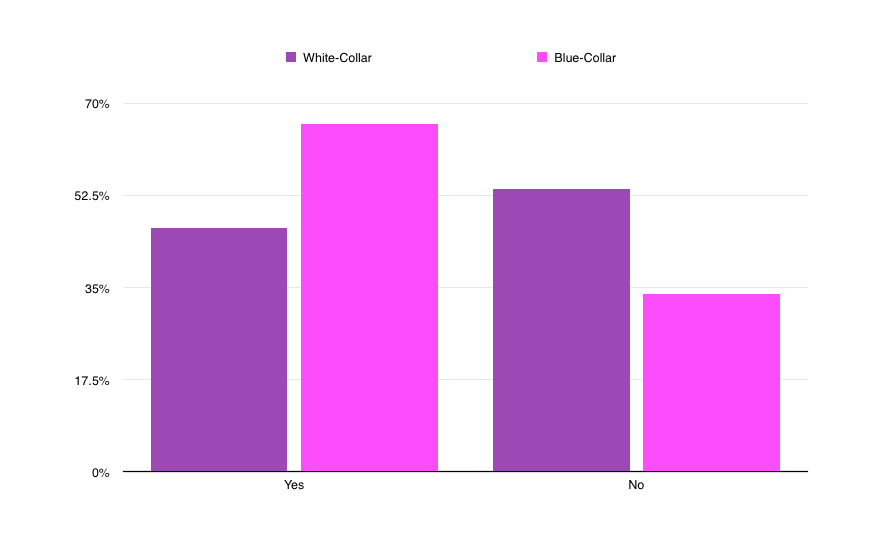 Fairygodboss Survey Question: "There are enough women in leadership roles in my company."

You may have also assumed that some of the horror storiesabout unpaid, short maternity leaves or the inability to pump breast-milk at work were only prevalent among blue-collar, hourly workers. We can think of three examples of professions (in both female and male-dominated industries) where pumping breast-milk at work presents serious challenges. For starters, let’s look at education. Teachers -- who are largely female -- often complain in their Fairygodboss reviews about the difficulty in finding a clean, decent place to pump at schools across America. Class schedules don’t align well with a pumping schedule and it’s difficult to find space that isn’t a bathroom at school, which is also clean and private.

We’ve heard similar stories among some of the most educated, well-paid members of our community. Consider emergency room physicians. Dara Kass, the founder of FeminEM recently shared with me how difficult it can be for female emergency physicians to find reasonable time and accommodations to pump breast-milk. It turns out that there are no easy, private places to pump in certain hospital settings, forcing doctors who are new mothers to feel they must choose between pumping breast-milk for their babies and doing their jobs. Kass also explained to me that it was therefore no surprise that the first hands-free pumping system was, in fact, designed by an emergency room doctor! And of course, two weeks ago, we all got a glimpse into what life might be like for female pilots who have to contend with the logistical nightmare of scheduling a time and place to pump that is not an airplane or airport bathroom stall.

What can one conclude then, about the plight of blue-collar versus white-collar women? On the whole, it seems to me that neither group has it tremendously better than the other. A woman's job circumstances -- as well as her specific employer’s policies and culture -- create a wide variety of experiences. While one might assume there is a large class divide, the truth seems to be that women really seem to be in the same (or quite similar) boat, together.