Since hitting bookstores and e-reader accounts last week, Ivanka Trump’s new book, “Women Who Work: Rewriting the Rules for Success,” has already become a New York Times bestseller — and, not all that surprisingly, a major source of controversy.

Now that Trump has essentially rebranded herself as the self-appointed champion of working mothers everywhere (a move that was purportedly ordained by her fashion line’s marketing team, sources have told the Times and Elle), some have wondered whether the First Daughter might actually have the potential to become the behind-the-scenes ally women need in an administration dominated by aggressively male views and decision making.

Inarguably, her “feminist” shift is one drenched in commercial intent. But if the result could be having a higher priority placed on women’s needs in the White House, does the end justify the means?

If the reaction many working moms have had to Trump’s “Women Who Work” treatise so far is any indicator — no.

The book is being panned by critics and moms alike as out of touch when it comes to the reality of the average American mom — i.e., the one who can’t afford to outsource childcare and housekeeping like Trump does. For all her pages of talk on how she manages to balance a family with a successful career, Trump uses the word “nanny” only once, instead positioning herself as someone who achieves solely from a place of ambition, not privilege. It’s something she (not unlike dear old dad) has been criticized for before, but failing to acknowledge the working women (many of them moms themselves) who make her lifestyle possible in a book about working women is a pretty startling oversight.

Here’s what some of America’s #RealWomenWhoWork have to say about it:

1. This woman made a spot-on observation about the book’s title.

2. While this one had a special invitation for Trump.

3. As this Twitter user pointed out, we can’t forget about ALL the working women in the First Daughter’s life — i.e., the ones she employs in overseas sweatshops. 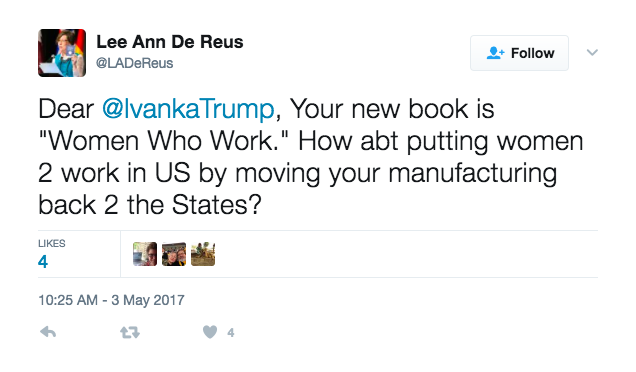 4. This woman reminded us there’s value in the work women do that’s unpaid, too.

5. This one thinks Trump should stop trying to be Sheryl Sandberg already.

6. And this woman has an idea for a fun new book club. 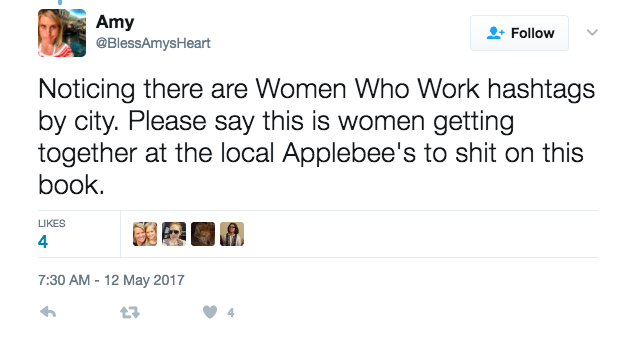