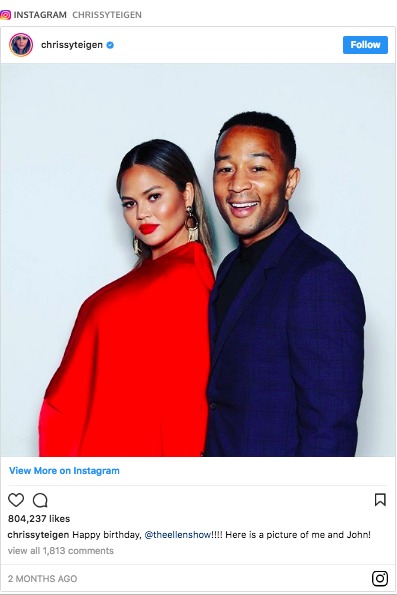 Whether or not you changed your last name or kept your own when you got married is a personal decision, but believe it or not, there are still people who are puzzled by the idea that some women wouldn't want to be a Mrs.

Case in point: A Twitter user who goes by the handle @_MercyFul and describes herself as the "lead vocalist for Destiny's Aunties." She told her Twitter followers, "I'd really like to hear the reasoning behind women who won't take their husband's last name."

Although she initially posted the query in August 2017, the tweet began to pick up steam in the past week, receiving over 1k retweets and thousands of witty replies, including some from model Chrissy Teigen, mom to Luna, 1, and expecting her second in June.

Though Chrissy is married to singer John Legend, she hasn't changed her last name. Her reply: "My husband didn’t even take his last name?"

She's slyly pointing to the fact that Legend is her husband's stage name, not his actual last name. (It's Stephens, by the way.) Hours later, she also tweeted, "You’ll never understand the simple reason of 'because I don’t want to?'"

Leave it to Chrissy to respond so simply and hilariously.

Chrissy clarified her reply in a third post, revealing she isn't against women taking their husband's last name and was going to take John's surname, but "just never got around to it." She also said, "It wasn't some grand statement not to. I just don't see how the choice affects anyone else—why do people care so much?"

We're totally with you, Chrissy. And it looks like plenty of other people are too. Below, some other epic responses from women who replied to the tweet. 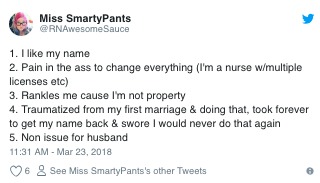 Whether you kept your last name because it's an annoyingly long process to change it, or because you view your last name as an important part of your identity, there are many good reasons to keep your maiden surname. And women shouldn't be judged for any of them. (As a note, no one on the thread so far has listed "IT'S BECAUSE I DON'T LOVE MY HUSBAND," as a reason.)

But before this can actually happen, it looks like society as a whole must reevaluate its idea of gender roles in marriage. Last year we reported on a University of Nevada study that found men are judged when their wives don't take their last name, and that they're perceived to have more feminine traits, fewer masculine traits and less power in their relationship. Another studyWorking Mother covered last year found that 50 percent of American adults think it should be illegal for women to keep their last names after getting married.

Clearly a lot of people still consider it a big threat to tradition and the status quo when women refuse to take their husband's name. But as more and more women continue to kick ass both professionally and academically, all we have to say to those naysayers is: expect to see a lot more women keeping their last names. Because they can.

This article originally appeared on Working Mother.
Working Mother is mentor, role model and advocate for the country’s more than 17 million moms who are devoted to their families and committed to their careers. Through our website, magazine, research, radio and powerful events, Working Mother provides its readers with the community, solutions and strategies they need to thrive.