If you live with depression, you’re not alone. The CDC reports that in a two-week period, 8.1 percent of adults, ages 20 and over, have depression. Women are twice as likely as men to struggle with it at 10.4 percent versus 5.5 percent, respectively. That means that if you’re in a room with 10 women, one of them is living with depression.

1. “I didn't want to wake up. I was having a much better time asleep. And that's really sad. It was almost like a reverse nightmare, like when you wake up from a nightmare you're so relieved. I woke up into a nightmare.”  ― Ned Vizzini

2. “That's the thing about depression: A human being can survive almost anything, as long as she sees the end in sight. But depression is so insidious, and it compounds daily, that it's impossible to ever see the end.” ― Elizabeth Wurtzel 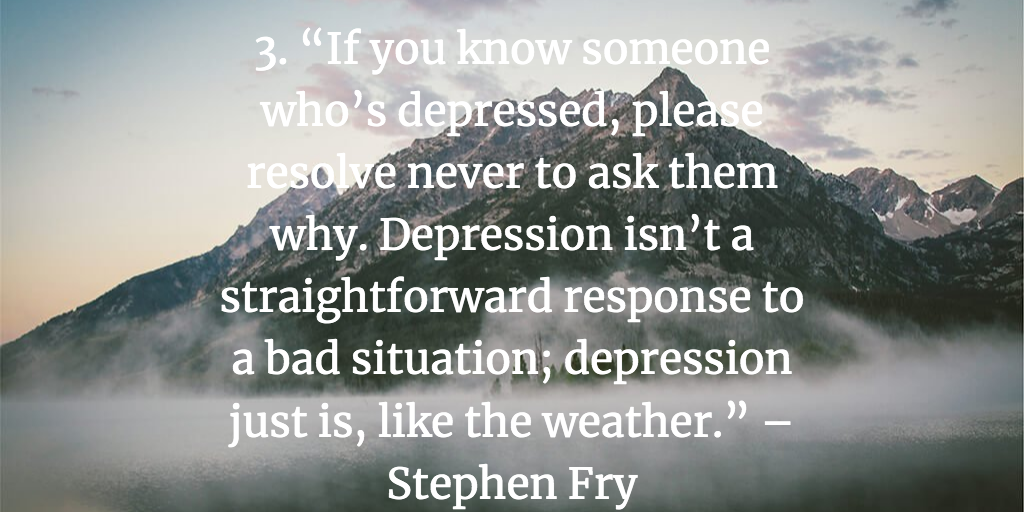 4. “Mental pain is less dramatic than physical pain, but it is more common and also more hard to bear. The frequent attempt to conceal mental pain increases the burden: it is easier to say 'My tooth is aching' than to say 'My heart is broken.'” ― C.S. Lewis

5. “Others imply that they know what it is like to be depressed because they have gone through a divorce, lost a job, or broken up with someone. But these experiences carry with them feelings. Depression, instead, is flat, hollow, and unendurable.” — Kay Redfield Jamison

6. “It's my experience that people are a lot more sympathetic if they can see you hurting, and for the millionth time in my life I wish for measles or smallpox or some other easily understood disease just to make it easier on me and also on them.” ― Jennifer Niven

7. “Depression is the most unpleasant thing I have ever experienced… It is that absence of being able to envisage that you will ever be cheerful again. The absence of hope. That very deadened feeling, which is so very different from feeling sad. Sad hurts but it's a healthy feeling. It is a necessary thing to feel. Depression is very different.” ― J.K. Rowling

9. “There is no point treating a depressed person as though she were just feeling sad, saying, ‘There now, hang on, you’ll get over it.’ Sadness is more or less like a head cold- with patience, it passes. Depression is like cancer.” –Barbara Kingsolver

10. “When you're depressed, it makes a lot of difference how you stand. The worst thing you can do is straighten up and hold your head high because then you'll start to feel better. “ – Charles M. Schulz 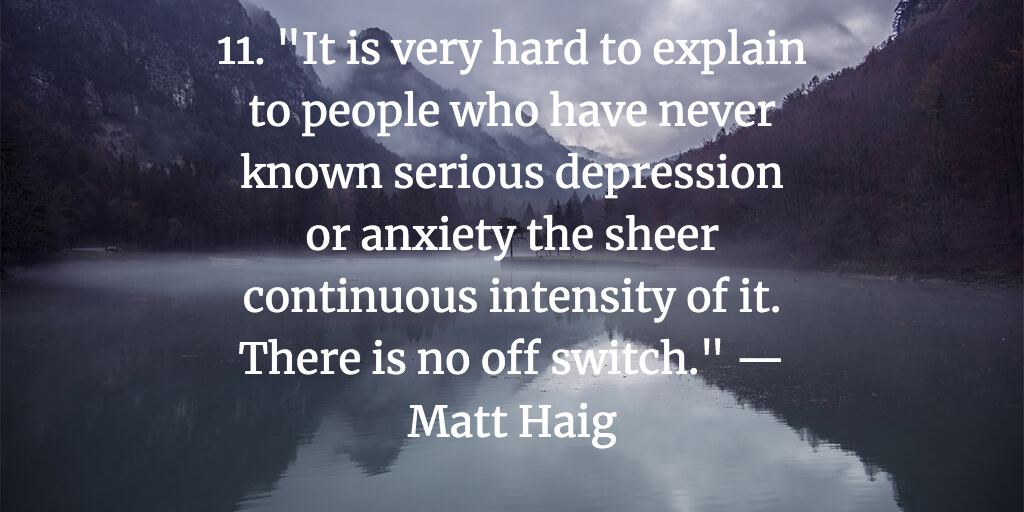 12. “The problem with mental illness is people don’t look at it as a physical illness. When you think about it, the brain is actually the most complex organ in your body. We need to treat it like a physical illness and take it seriously.” – Demi Lovato

13. "Sometimes I can hear my bones straining under the weight of all the lives I'm not living." — Jonathan Safran Foer

14. "Whatever you're feeling right now there is a mathematical certainty that someone else is feeling that exact thing. This is not to say you're not special, this is to say thank god you aren't special." ― Neil Hilborn

15. “Seek out the memories depression takes away and project them into the future.” — Andrew Solomon

16. “Every man has his secret sorrows which the world knows not; and often times we call a man cold when he is only sad.”
― Henry Wadsworth Longfellow

17. “I didn't want to wake up. I was having a much better time asleep. And that's really sad. It was almost like a reverse nightmare, like when you wake up from a nightmare you're so relieved. I woke up into a nightmare.” ― Ned Vizzini

18. “There are wounds that never show on the body that are deeper and more hurtful than anything that bleeds.” ― Laurell K. Hamilton

19. “That's the thing about depression: A human being can survive almost anything, as long as she sees the end in sight. But depression is so insidious, and it compounds daily, that it's impossible to ever see the end.” ― Elizabeth Wurtzel

20. “Do you not see how necessary a world of pains and troubles is to school an intelligence and make it a soul?” ― John Keats

21. “Mental pain is less dramatic than physical pain, but it is more common and also more hard to bear. The frequent attempt to conceal mental pain increases the burden: it is easier to say “My tooth is aching” than to say “My heart is broken.” ― C.S. Lewis

22. “When you're surrounded by all these people, it can be lonelier than when you're by yourself. You can be in a huge crowd, but if you don't feel like you can trust anyone or talk to anybody, you feel like you're really alone.” ― Fiona Apple

23. “Noble deeds and hot baths are the best cures for depression.” ― Dodie Smith 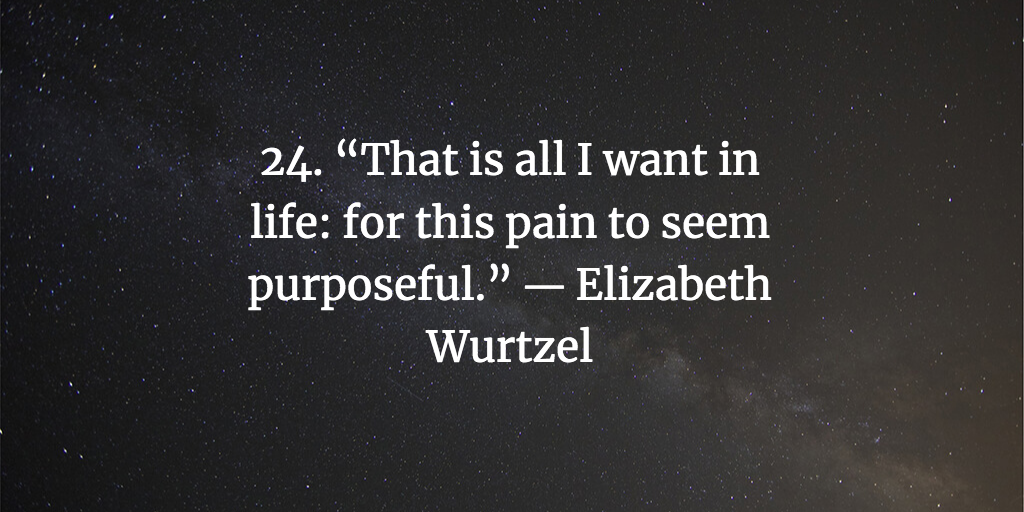 25. “I believe that words are strong, that they can overwhelm what we fear when fear seems more awful than life is good.” ― Andrew Solomon

26. “I'll never forget how the depression and loneliness felt good and bad at the same time. Still does.” ― Henry Rollins,

27. “The sun stopped shining for me is all. The whole story is: I am sad. I am sad all the time and the sadness is so heavy that I can't get away from it. Not ever.” ― Nina LaCour

28. “You say you're 'depressed' - all i see is resilience. You are allowed to feel messed up and inside out. It doesn't mean you're defective - it just means you're human.” ― David Mitchell

29. “If you are chronically down, it is a lifelong fight to keep from sinking ” ― Elizabeth Wurtzel

31. “Maybe we all have darkness inside of us and some of us are better at dealing with it than others.” ― Jasmine Warga

32. “Mental illness is so much more complicated than any pill that any mortal could invent.” ― Elizabeth Wurtzel

33. “You're like a grey sky. You're beautiful, even though you don't want to be.” ― Jasmine Warga

34. “Depression on my left, Loneliness on my right. They don't need to show me thier badges. I know these guys very well.” ― Elizabeth Gilbert

35. “I will be stronger than my sadness.” ― Jasmine Warga

Are you a depressed person or do you suffer from depression now and again? This is some solid advice for those living with this debilitating mental illness. Fight back and get your mental health back on track. Try to remember all of the good things that have happened to you, and fight to believe that you will have those times again. It'll hopefully give you a sense of well-being if you're in a depressed mood or are suffering from clinical depression. And while you cope, these inspirational quotes about depression are here to help. What's another quote on depression that has helped you before?