Maslow's Hierarchy Of Needs And Its Effect On Business

Many of us are at least vaguely aware of the theory of Maslow’s Hierarchy of Needs from that one Intro to Psychology class we took.

What is the hierarchy of needs?

What we remember, if anything, tends to be this:

In his 1943 paper, “A Theory of Human Motivation,” published in Psychological Review, American humanistic psychologist Abraham Maslow identified five ascending levels of goal attainment. The resulting hierarchy he then published went as follows: Physiological Needs; Safety Needs; Love and Belonging Needs; Esteem Needs; and lastly, Self-Actualization Needs. Maslow argued that these levels explained humans’ needs and motivators; once our base physiological needs (or motivators) — like air, food, shelter, and sleep — are fulfilled, we move on to the next level in the pyramid chart until we eventually (or at least ideally) reach Self-Actualization. 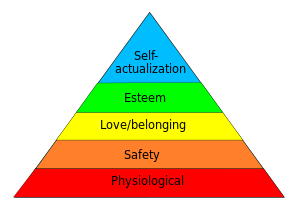 Maslow's theory — the psychologist's most recognized work — influenced the development of other theories, including Frederick Herzberg's two-factor theory, which states that some factors cause satisfaction in the workplace, while others cause dissatisfaction.

Who was Abraham Maslow?

Born in the early twentieth century to first-generation Jewish immigrants, Abraham Maslow was a prominent psychologist in the United States. Despite being characterized as "mentally unstable" by a psychologist when Maslow was a child, he went onto to become a psychology professor at several colleges and universities—and, of course, created the hierarchy of needs. He was posthumously ranked as the tenth most-cited psychologist of the twentieth century by A Review of General Psychology in 2002.

Maslow’s hierarchy of needs in the workplace

As interesting as this all is (and as pretty as that pyramid chart is), you’re probably starting to wonder — what does this Maslow pyramid have to do with my business and/or career? Well, for starters it is a theory of human motivation and the Maslow need hierarchy explains that certain things are more foundational than others to health and well-being, as well as for further achievement.

If you’re fortunate enough to work at a company that prizes its employees, chances are the forces of Maslow’s pyramid hierarchy might already be at play in your workplace. And if they’re not, know that these principles aren’t difficult for a manager — or better yet, a CEO — to instill at your company. Today, corporations are being expected more and more to comply to a high standard of ethics, and that includes ensuring that employees’ needs are truly being met. And as a business leader, striving to meet your team’s needs doesn’t just make sense morally — it’s good financial sense, too, as attracting and retaining top talent has become a highly competitive endeavor.

So, what can your company do to make sure employees’ needs are being met, per Maslow? Let’s take a look at each level within the hierarchy to get a better idea of how it extends to corporate culture.

According to Maslow (and common sense), the core physiological needs humans must have met, include:

This is the simplest area where all employers should be able to ensure employee satisfaction. To best perform their jobs, workers require a decent standard of health compliant with this category; namely, they need clean air to breathe, plenty of water to stay hydrated, and rest time between and during shifts. As Maslow himself described in his 1965 industrial psychology book, Maslow on Management, when these basic survival needs aren’t being met, people become numb to the developing of ambition. Such is especially the case when people are pushed to the point of dehydration, exhaustion, and starvation by their job.

Hopefully, your current work situation isn’t as bad as all that. After all, employers can safely check “Physiological Needs” off their list by doing things as simple as providing clean water via water filtration systems and ensuring that people are actually encouraged to take lunch breaks (which meets both the “food” and “rest” sub-needs within this category). But who wants to settle for just-enough mediocrity? If employers really and truly want to be sure their workers’ physiological needs are amply provided for, a slightly less overt solution is in order — try paying them a living wage.

This level in the hierarchy means safety that’s both literal (protection from the elements, absence of violence, and financial security, for instance) and more abstract (law and order, political stability, etc.). What does this look like in a corporate setting? Obviously, it means a workspace that’s physically safe and as free from the threat of injury as possible (i.e. those workplaces reviewed by Upton Sinclair in “The Jungle” probably wouldn’t make the cut..not to mention, cause some post-traumatic stress). But it extends further than safety and security, covering a worker’s emotional well being, as well.

When an employee knows they’re covered by adequate medical and retirement benefits, for instance, that sense of security frees them from stressors that would’ve otherwise competed for mental space with their job. And when workers feel that they have both job security at present and a more overarching financial security in the long run, they’re much more likely to remain loyal to that job, too.

Where the first two levels of the hierarchy should be a given at any workplace, here’s where it starts to get a little trickier. Companies can ensure their employees’ Love and Belongingness Needs — which include friendship, intimacy, trust, and acceptance — are being fulfilled in two ways:

At an office where nobody is social, chats or swaps funny anecdotes, but instead contains employees who silently work, heads down, until 5 p.m., is a culture that allows for love and belongingness simply isn’t going to exist. It’s not outrageous to posit that people will enjoy and value their jobs more if the workday involves at least a wee bit of fun. There are many methods of promoting a friendly, collaborative culture at your company, but one of the most crucial steps is getting people to spend a little time together off the clock, whether that’s at a company-sponsored happy hour or on an office-wide kickball team.

More so than the activity or location, the important thing is that your company condones and enables this type of culture by having a hand in at least a few work-wide events to help create a feeling of belongingness.

Family, and the quality time one is able to spend with them is obviously a major component of one’s love-and-belonging experiences. Companies can recognize that by instituting policies that allow employees to better balance their family and job duties, including by having paid parental leave programs, the possibility of flexible hours, on-site pumping rooms, and by offering aid in child-care costs.

Maslow defined this tier’s characteristics as: self-esteem, confidence, achievement, and enjoying the respect of others. Coincidentally, these are all areas in which an employer can play a pivotal role, especially in striving to recognize employees for their achievements. The Esteem Need was further divided by Maslow into two categories, external and internal motivators, and companies can play crucial parts in each.

For external motivators, things like prizes, awards, and promotions go a long way in making people feel properly (read: publicly) acknowledged for a job well done. Internal motivators, on the other hand, are private goals that employees individually set for themselves; as these personal goals are met, their self-esteem correspondingly rises. Though this component of esteem may be internal, employers can still support it by supporting workers in their plans for advancement and allowing for open, honest conversations about goals and future intent. And, if nothing else in this Maslow debriefing sticks with you, know that human beings and workers who feel supported and satisfied make for better workers. Pus, it never hurts to build that responsibility = reward association.

In Maslow’s Motivation and Personality, he defined this level as the desire to accomplish everything that one can and to become the most one can be. While the other tiers are fairly generic and commonly rooted in human nature, this one predominantly has to do with what is unique in the self; so, one person’s self-actualization is unlikely to look anything like the next person’s. This level is all about actualizing the apex of your potential, growth, and experiences, and it can only be met under Maslow theory, when the other four tiers have not only been achieved, but have been mastered.

For something that’s so inherently individualistic, what role can an employer have in enabling workers to reach the pyramid’s peak and to become a self-actualized person? For starters, they can bear in mind the growth we as humans should be experiencing if we’re ever going to “self-actualize” and be prepared to make adjustments accordingly. Too often, there’s a sense of rigid convention when it comes to job duties and function, and individual workers, for the most part, have very little autonomy to individualize their work experience.

Under the Maslow theory of motivation, an employer could help allow for that autonomy by doing something as simple as seeking workers’ feedback (and actually taking it into account) more, to giving employees the ability to shape and tweak their own job descriptions and functions (within reasonable limits). We’re all growing and changing, all of the time, and employers should be aware that a scenario that was just right for an employee a year ago may no longer be the right fit today.

Lastly, in Maslow’s mind, self-actualization was heavily tied to altruism and the ability to see beyond oneself once the self was actualized (later in life, he even created a sixth tier, Self-Transcendence, to better capture this sentiment — but that’s a story for another day). Just as individual employees can self-actualize, so, too, can whole corporations by aligning themselves with a mission that extends beyond merely generating profit. And now more than ever, channeling power into positive impact isn’t just an exception for corporations — it’s becoming the expectation.