Mentorship, Forging Your Own Path and Other Top Advice for Women Engineers — From a Group Lead

What are the challenges of being a woman in the engineering field? Well, the “most challenging part of being a woman engineer has always been feeling like I don’t necessarily belong,” says Laura Angell, the group lead (people manager) for the Quality and Continuous Improvement team at ASML, the world's leading supplier and manufacturer of complex lithography machines. “I have spent years of my career being the only woman on the team, the only woman in the meeting and often not interacting with any women in any professional capacity.”

However, as Angell notes, “things are slowly changing.” For example, her team, which works together to help ASML’s project teams produce robust designs that stand up to customer needs, is over half women! “I find it especially rewarding to have been promoted into people management because my personal style is appreciated, and no one wants me to be anything other than authentic,” notes Angell. “I am enjoying watching the landscape change so that our new female engineer hires never have to be the only woman in the room.”

Positive changes like this are common at ASML, with the company actively trying to be a force for good, not just for technology, but also for their people, communities and the planet. To do so, ASML is on a mission to support all of their employees, promote true equality and create a safe, inclusive and trusting environment where everyone can thrive.

Angell took the time out of her busy schedule to tell us a little bit about her daily life as an engineer at ASML, what it’s like being in her field, her best advice and more. Check out her answers below!

What is your normal day-to-day life like at work?

My day-to-day work life is full of meetings. They range from one-on-one meetings with the members of my team to work on their professional growth and the details of their deliverables all the way to sitting on corporate-level boards as the representative for my site who decides and executes the high-level vision for various aspects of our company. I also own a lab, so some of my time is spent with our facilities and finance departments planning lab growth to support the future needs of our development. 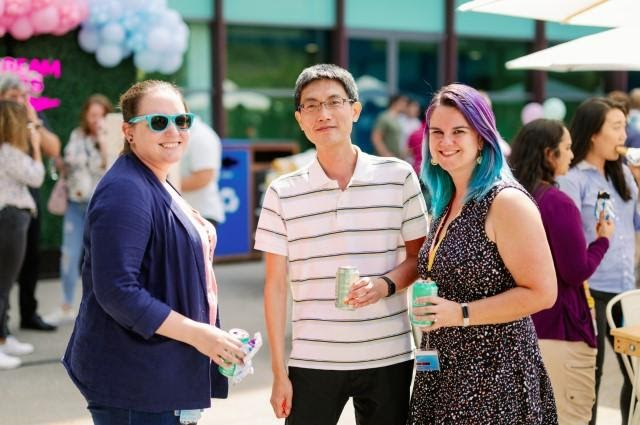 Angell and two members of her team. Photo courtesy of ASML.

Do you have any recent projects or accomplishments that you are particularly proud of?

I have held one of the leadership positions for our Women’s employee resource group at ASML since 2018. While our pillars are focused on professional development, networking and building a sense of community for the Women at ASML, we are an inclusive group encouraging everyone who believes in those ideals to join. 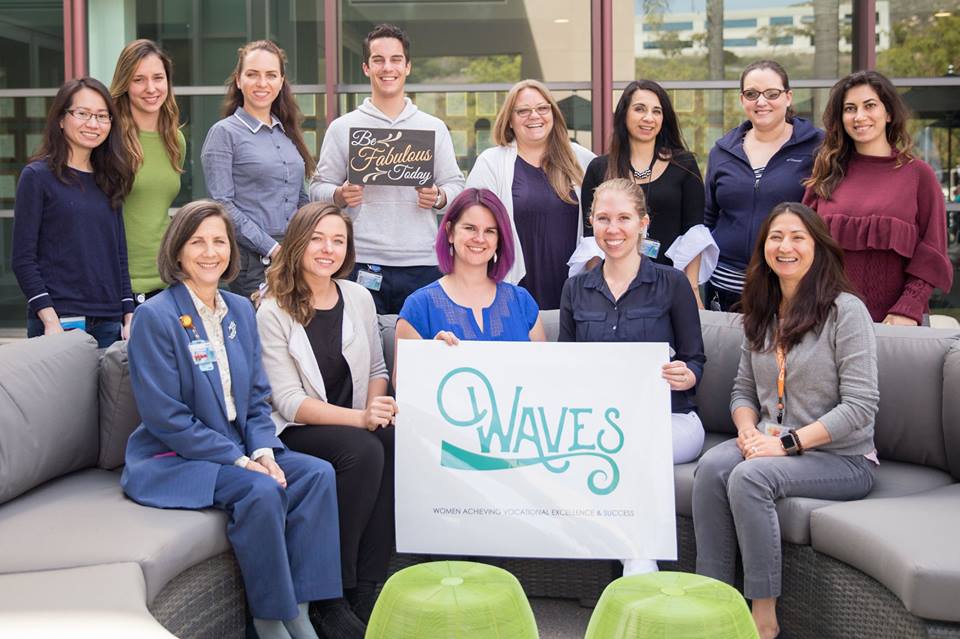 Women at ASML and WAVES are two networks creating a strong, connected group of women and supportive colleagues, with the goal of seeing an increasing balance in leadership roles. Here, we see Angell and the WAVES network celebrating International Women’s Day. Photo courtesy of ASML.

We have been working on an allyship campaign that we are partnering with our Chief Diversity and Inclusion Officer and HR on that will launch in early 2022. The campaign will help to make diversity topics more approachable to everyone who wants to participate and provide simple, tangible advice for how to be an ally to all under-represented groups.

We will also kick off a lunch series called “Ally-Hour,” which will be a safe space to talk about how to be an ally and discuss behavior that is coming from a good place but is having unintended negative consequences. We think it’s important to engage with the entire community and not just the women (or other under-represented groups) to foster the inclusive culture the future needs.

When growing your career at ASML, was there anything that surprised you?

It’s not necessary to follow an obvious and linear path to pick up the skills that you need to reach the next level. In my five years at ASML, I have worked in four different departments, doing seven different roles, and the actual role progression doesn’t really make a lot of sense holistically. However, in each role I built my network, picked up new skills and knowledge of how the company works and had the opportunity to show my flexibility. I am now in a role that I find myself uniquely suited for and it’s a great fit for who I am as a person.

How did you decide to become an engineer and join a traditionally male-dominated field?

I have always had a passion for STEM. In high school, I always pursued as much math and science as I could, and I went so far as to join the Science Olympiad team and take on the role of president for two years. I went to Harvey Mudd College, a school with only STEM majors.

I decided to pursue a career in engineering after I took an intro to engineering course, and we reverse engineered how the electronics in a children’s toy worked. It was such an enjoyable experience that I knew engineering was the right path for me. Although my first job out of college had an extremely low percentage of women, I was lucky enough to join that job with my college roommate. It was really great to have a close ally to lean on when it was tough to be a woman.

What’s your No. 1 piece of advice for women looking to start a career in engineering?

Find a mentor. They shouldn’t be your manager, and they don't need to be someone especially senior. But make sure that you have someone to talk to that can understand when you find yourself in a hard situation, or not sure what opportunity to set your sights on next. The most important part of the mentor relationship should be trust. You need a safe space to go and talk about the real things that are going on in your world.

Is there anything else that you’d like to mention?

The world is changing. About a year before I started at ASML, I began to dye my hair fantasy colors (blue, green, pink, etc). When I interviewed with a recruiter at ASML, I asked if my hair would be okay or if it would be better if I dyed it back to my natural brunette color. The recruiter looked at me and very seriously asked me why my hair might be a problem. So I kept my crazy hair colors and it turned out to give me a leg up at ASML. 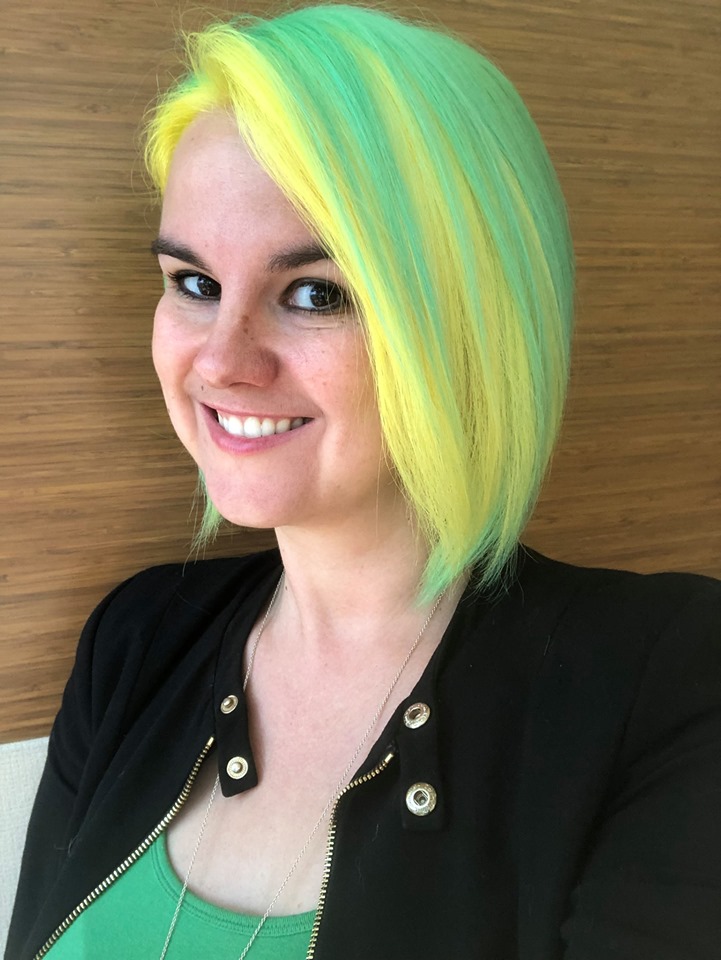 Since I started, I have been a person that was easy to recognize, and the hair gave me visibility that would have been hard to achieve in more conventional ways. It was important that I was good at my job because I was going to end up with more attention than I would have otherwise, but it made me memorable. So, don’t be afraid to show up to work as yourself. It’s not necessary to try and fit in with the majority. And it may turn out to be one of the best things you can do for your career.

Fairygodboss is proud to partner with ASML. Find a role at ASML that is right for you!