Tired of hearing passive aggressive comments from colleagues about her arriving to work later than the rest of them, one mom decided to give them all a reality check with a social media post detailing her complicated morning routine, So Feminine reports. 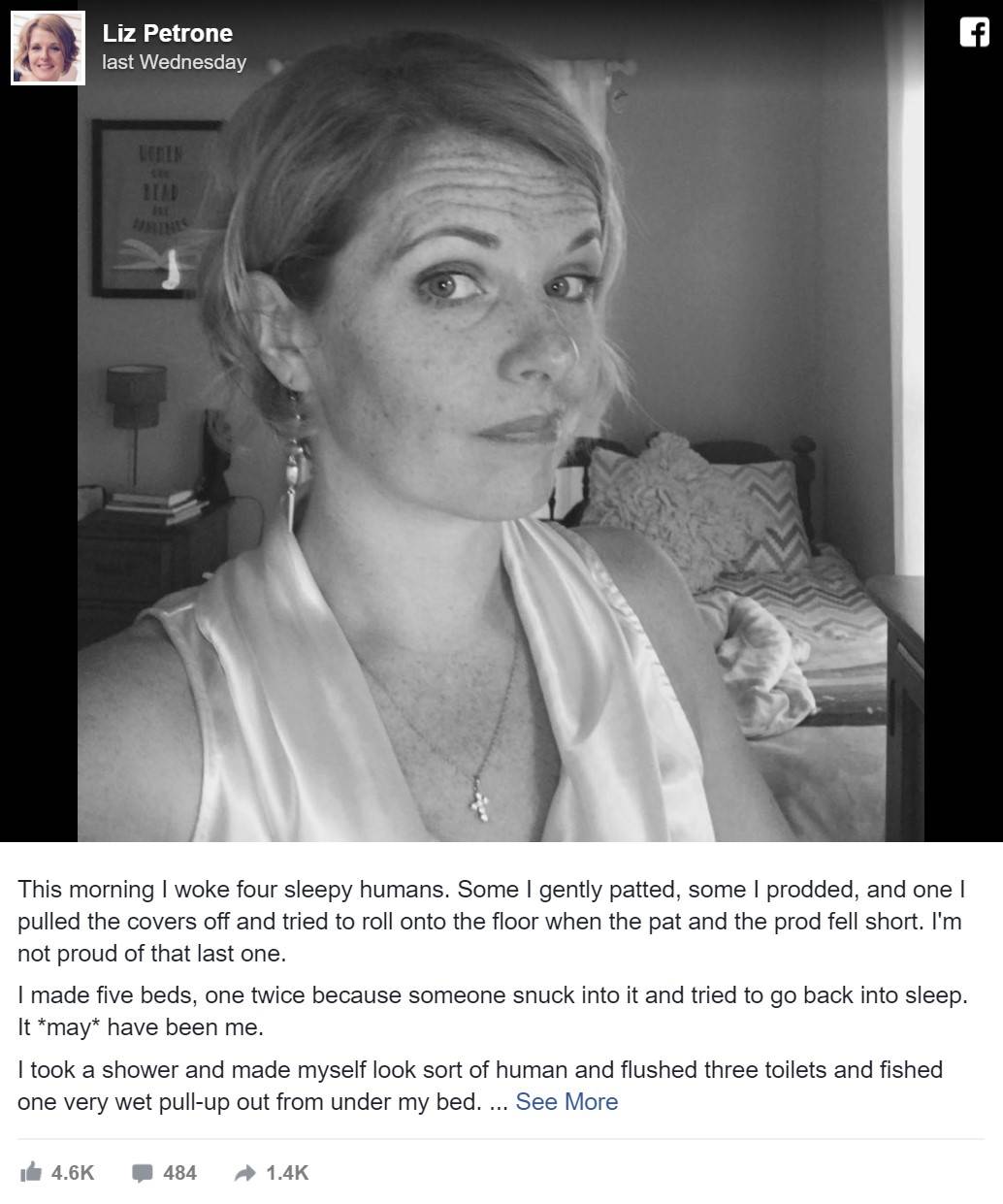 Last week on her Facebook page, New York writer, blogger and mom Liz Petrone shared everything she manages to get done before her 9 a.m. starting time, which, let's be honest, isn't a very late start time at all in some professions. In addition to waking up all her kids — "Some I gently patted, some I prodded, and one I pulled the covers off and tried to roll onto the floor when the pat and the prod fell short" — she makes beds, takes a shower, flushes toilets, loads up on caffeine, dresses her kids, reminds them to brush their teeth and so forth. She also yells, drives them to school, waits with them at the bus stop, and then returns home — to clean, care for the dog and do more stuff.

"By the time I sit in my chair at work and fire up my computer, my Fitbit says I have walked 2.5 miles. All just to get us ready and out of the house. And if walking 2.5 miles and not actually making it anywhere at all ain't exactly what this stage of life looks like, I don't what is," she writes.

Walking 2.5 miles by 9 a.m.? For working moms, that sounds just about right.

Liz assures us, however, that she doesn't share her morning schedule so people feel bad for her. In fact, she's aware that she's fortunate in many regards, including the fact that she has a job in the first place that affords her flexibility, has four healthy kids and lives in a culture where she's even able to work.

Instead, she's discussing her morning routine as a tribute to all the hardworking moms out there. "I tell you this because if one more person says to me, 'Wow, it sure must be nice to be able to waltz into work at 9:00 a.m.' I am going LOSE IT," she writes. "To the working mamas, I feel you. I feel you so hard right now. But more than that, to ALL the mamas, I'm raising my cup of (now cold) coffee. You keep on doing you, sister, whatever that looks like." She adds there's only one exception to the kind of moms she's trying to honor — the ones who are judgmental. "Ain't nobody got time for that ish. Some of us have work to do," she writes.

Liz's words resonated with many, resulting in over 300 shares and over 100 comments. One user wrote, "I literally love this post today. I only have 2 littles and I also have a full-time job (the one that pays the bills) because we know being a mom is a full-time job in itself." Another said, "That's not even a fraction of what needs to be done at home but you are not alone ... Hang in there and you are doing an amazing job!"

Liz's message is clear: moms work tirelessly, and there's more effort, energy and willpower involved in their role than many people without kids will ever understand. Most importantly, working moms need support, not criticism that they somehow have it "easy." As her post details, it's quite the opposite.

This article originally appeared on WorkingMother.com.