These Charts Showcase What's Wrong About The Gender Pay Gap

The current discussion about the gender pay gap often remains in the title. "Women make 20 percent of what men make," and each side tries to argue with singular arguments why the other one is wrong: "this happens because of discrimination" or "this happens because women lean out of the workforce or work part time." The reality is, as always, much more complex.

Here are 10 things you should know about the Gender Pay Gap: 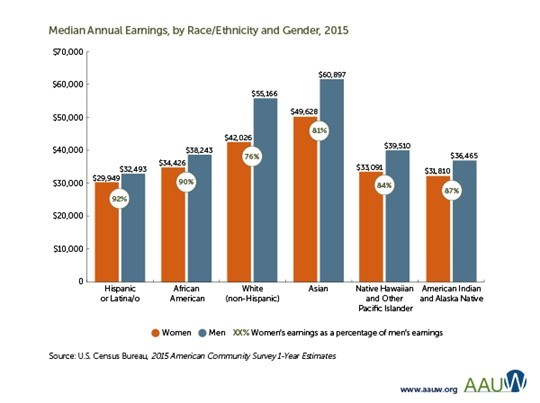 2. Women are more likely to work in lower-paying professions than men. Nevertheless, women now constitute 44 percent of the workforce in higher-paying management, business and financial occupations as well as make up a majority of university graduates. 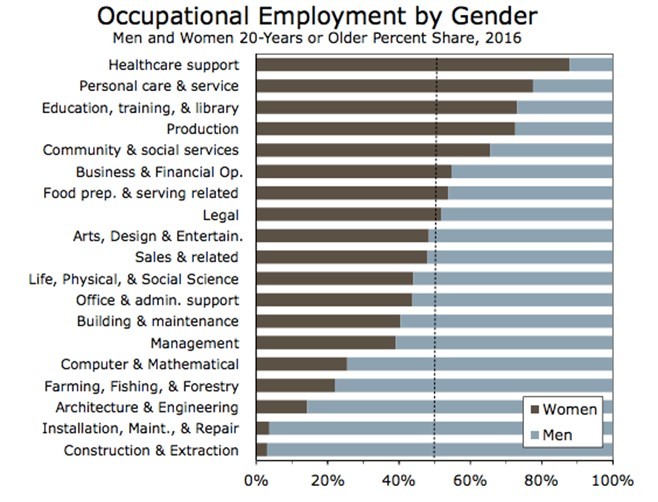 3. Experience, industry and occupation choices account for about 62 percent of the gender pay gap. The other 38 percent remains unexplained. 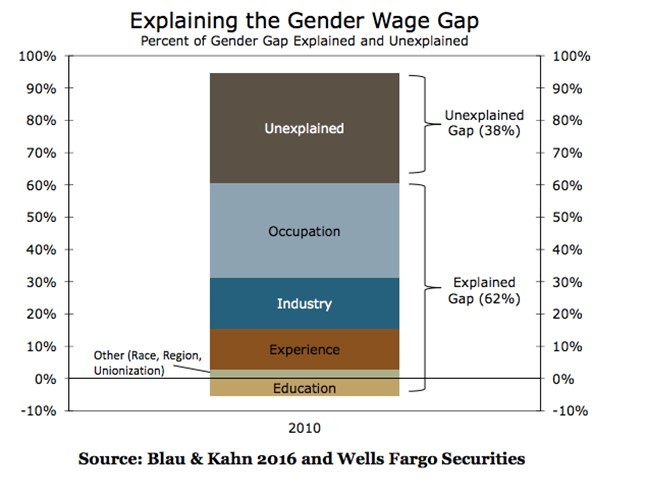 4. When controlling for same profession and role, the pay gap between men and women reduces to single digits, for lower paying jobs. 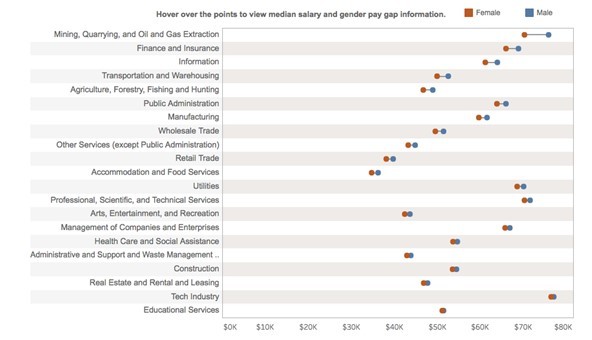 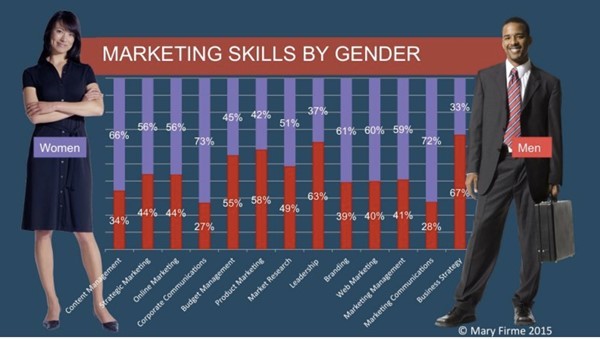 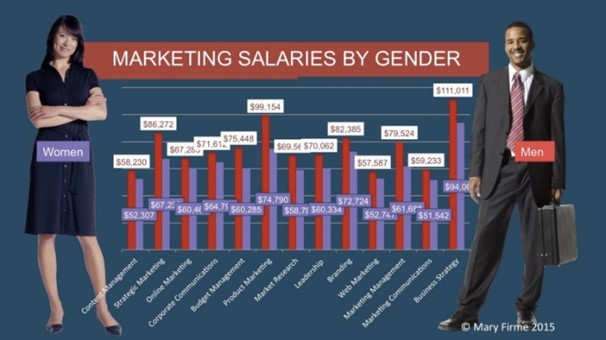 5b. The higher paid the profession is, the more likely it is to have a double-digit gender pay gap. For example, male investment bankers, lawyers and surgeons earn significantly more than female counterparts. 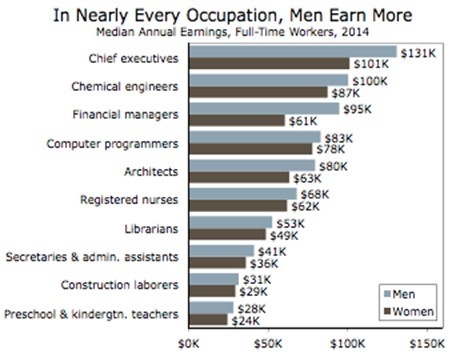 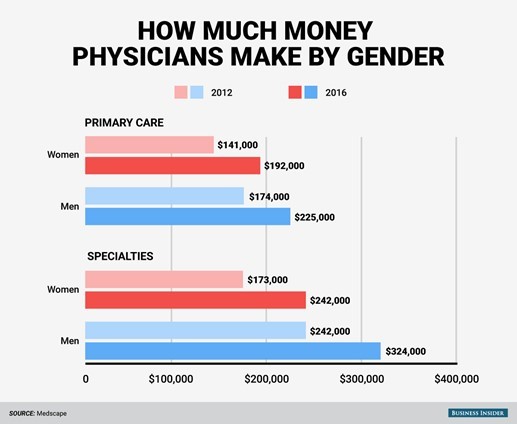 6. Historically, women might have self-selected into lower paying careers. But even when we look at highly ambitious women, who graduated from top MBA programs, we see a gender pay gap that starts six to eight years out of school. 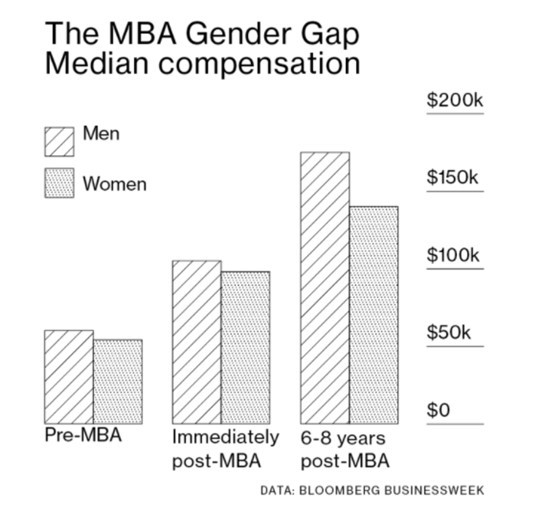 Bloomberg studied over 12,000 alumni from top MBA programs and found that after six to eight from graduation, the gap between men and women’s salaries grew from $7,000 to $35,000. Some of the gap was attributed to larger bonuses paid to men.

Women who went into the higher paying finance careers saw an even higher average pay gap (earning on average $53,000 less than men).

7. Women don't reach the higher paying roles at the same rates as men do. According to PayScale,"Men are 85 percent more likely than women to be VPs or c-suite execs by mid-career, and 171 percent more likely to hold those positions late in their career. Conversely, by the time they reach age 60, more than 60 percent of women are still working in individual contributor roles, but less than 45 percent of men are still in this type of job."

9. Motherhood, on average, brings a pay penalty for women. Mothers have a harder time going back to the workforce after taking time off. Yet, about 64 percent of young mothers remain in the workforce. 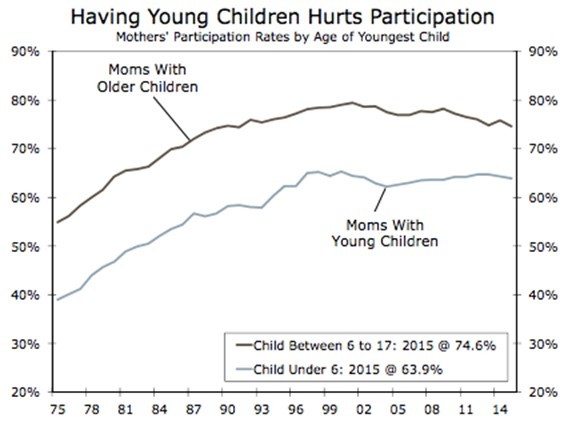 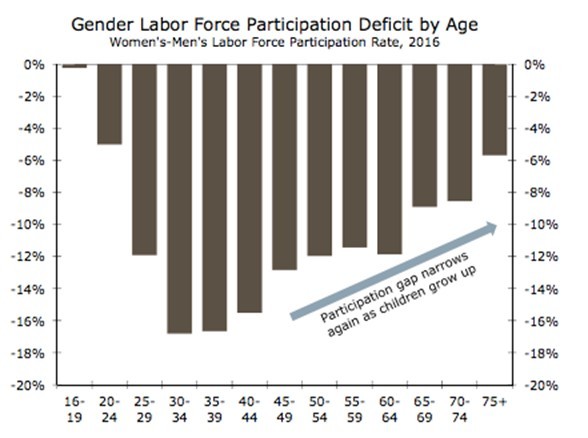 "Traditional social roles, the high cost of childcare and a lower level of earnings keep a larger share of women outside the labor force even if they would like a job. In 2015, the number of women who wanted a job but were not currently looking due to childcare or family responsibilities was nearly four times greater than the number of men.[..] While women are increasingly the primary breadwinners in their household, for more than 70 percent of working married couples, men still out-earn women. With women more likely to be the secondary source of income, there may be less pressure to find a job or remain employed.”

10. The good news is that younger women are asking for more and are getting more. The Hired.com gender wage gap study also shows that female candidates straight out of college have higher salary expectations than men. 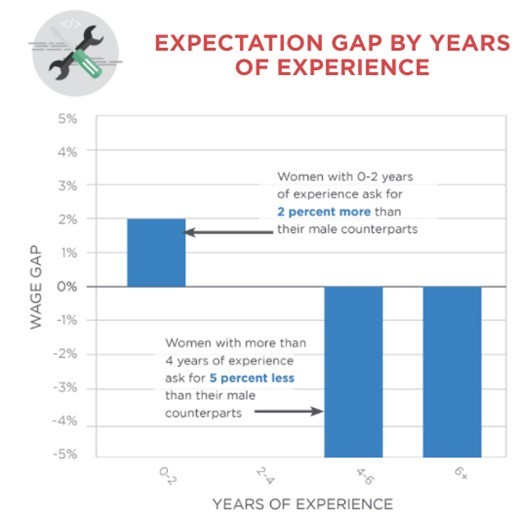 This is happening perhaps because of the awareness raised about the pay gap in the last several years. The good news is that they actually get what they ask for. Women with more experience, however, tend to ask for less than male counterparts.

Lower salary expectations also accumulate over the course of one's career and can lead to higher gender pay gap at more experienced levels.

Where do we go from here?

Closing the gender pay gap is a very complex problem that requires policy solutions like creating incentives for women to pursue certain fields and providing affordable childcare options for parents. In the meantime, what can companies and individuals do to help reduce the gap?

Miriam Grobman Consulting works with organizations that want to advance more talented women into leadership roles by breaking cultural barriers and giving them the right skills to be successful. Their approach is data-driven, global and collaborative. Contact them if you'd like to discuss the right strategy for your organization. You can follow their Facebook page, Leadership and Women for inspiring stories about women leaders and practical career advice and sign up for their newsletter.

0 Comments
Browse recent articles
‘We Have to Humanize the Workplace:’ 3 Traits This Director Says You Need to Excel in Engineering
Expert Advice for Growing an Empowering Career at a Great Company — From a VP of Talent Development
8 Green Ideas to Make Your Office More Eco-Friendly and Effective
The Dirty Dozen: The Worst Things You Can Put On a Resume In 2022
Don’t Be Afraid to Live, Dream and Pivot Your Career, According to a Senior People Business Partner
3 Reasons To Ask For a Promotion Prior to Labor Day — And How to Go About Doing So
See more
Achieve your career goals.
Be part of the largest online career community for women to find jobs, advice, and support — for free.