Mystery Woman
Tell us more for better jobs, advice
and connections
YOUR GROUPS
Discover and join groups with like-minded women who share your interests, profession, and lifestyle.
COMPANIES YOU FOLLOW
Get alerted when there are new employee reviews.
YOUR JOB ALERTS
Get notified when new jobs are posted.
Return to Work

If you weren’t afraid, what moves would you make in your career?

That question was consistently at the center of conversations happening at iRelaunch’s annual New York City event, the Return to Work Conference, in October. Sold out for nine consecutive years, the event brought together women and men who are looking to re-enter the workforce after a career break for a day of informative talks and networking opportunities.

For many, applying to jobs with a noticeable gap on your resume — whether the reason for that be caregiving or another matter — isn’t a situation that naturally builds confidence. The presenters at iRelaunch’s event, many of whom have taken career breaks themselves, understood that, and they dished out advice to a packed auditorium designed not only to guide attendees’ job search, but also to remind them of their professional value. 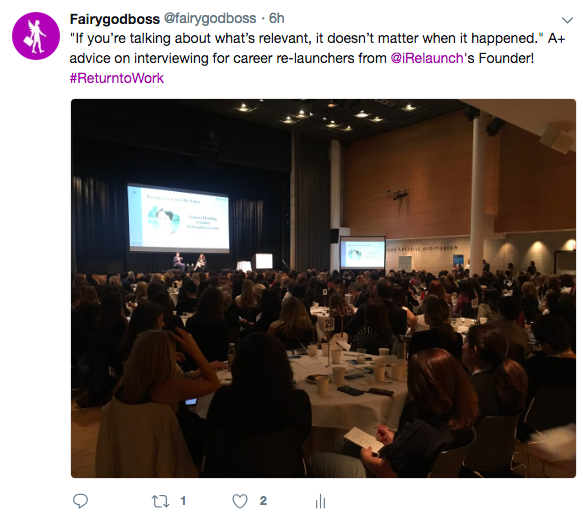 “Experienced talent is something we simply can’t get enough of,” Rob Rooney, managing director and head of technology at Morgan Stanley, one of the day’s sponsors, said. “As a company, Return to Work is a strategic priority for us… we are looking at a talent pool in this room that has a lot of experience. We have no problem recruiting some of the best and brightest out of universities, but these young people don’t have the experience that you do.”

Assuaging another common anxiety felt by career re-launchers, iRelaunch’s Founder, Carol Fishman Cohen, emphasized that beyond work experience, maintaining a certain attitude can be an equally important tool in your job search belt.

“Employers are less worried about the level of tech knowledge you may have upon re-entry — but they do want to know that you have a fearless approach to learning,” Fishman Cohen said.

In keeping with a spirit of striving toward that fearlessness, here are five other useful — and empowering — pieces of advice to come out of the event.

1. Achievements don’t have an expiration date.

During a workshop on interviewing strategies with Michael Neece, CEO of Interview Mastery & Selecting Excellence, Cohen reminded attendees that what matters most is the feat you accomplished — not what year it happened in.

“If you’re talking about what’s relevant, it doesn’t matter when it happened,” she said.

Be sure not to accidentally undermine or date yourself, she added, by referencing an accomplishment as something that happened many years ago; use active language to discuss your achievements instead.

2. Go analog and take your job search outside.

Katie Fogarty, founder of career communications consultancy Reboot, advised attendees not to buy into the idea that staying home and applying to jobs online will be sufficient.

“There are no hiring managers at home,” she said. “You need to let as many people as possible know that you’re looking. You need to share with them your story. In doing that, you can reboot how people see you.”

By remembering that “you are in the driver’s seat” of sharing your story — and that your story needn’t include an impression of being outdated or out of the loop — career re-launchers can define and declare their value out of the house, Fogarty said. From attending university lecture series to registering for Toastmasters, she added, the options for forging career connections in person are more numerous than you might think.

3. Utilize social media — but be strategic about it.

“The biggest mistake you can make on LinkedIn is setting up an account because you have, and then doing nothing with it,” Oliver Schinkten, a staff author and e-learning educator at LinkedIn, said. “I’ve talked to hiring managers who’ve said, ‘Yeah, this person applied for the job and I went to find them on LinkedIn, but their profile had nothing on it — not even a photo.’ It makes people think you don’t ‘get it’ or understand how it works.”

Schinkten, who took a career break to be a stay-at-home dad for a year, said that he’d previously underestimated the usefulness of social media, but that when he was re-launching, it was “the thing that helped me most, by far.” For her part, Cohen pointed out that social media can also be useful during interviews to indicate to employers that you’ve stayed current.

“Mention something you saw on the company’s Twitter page and liked or agreed with,” she said. “It’s an easy and subtle way of demonstrating that you use social media.”

“So many people think, ‘If I ask for anything else, I’m going to blow this,” Ginny Brzezinski, author and MSNBC.com collaborator with sister Mika, said during a negotiation workshop. Unfortunately, that leads to many re-launchers accepting an offer that sells themselves short, especially within the salary space. A way around this, career consultant Mary Beth Barrett-Newman said to Brzezinski, is to be clear with yourself about your needs before the interview process even begins.

“In the interview, we often don’t even think about getting clarity on the things that are important to us in a job offer,” she said. “Get clarity in advance, and know where you’re able to compromise and what your non-negotiables are.”

5. Spend time with what scares you.