This past Tuesday, Senator Larissa Waters made history when she became the first person to breastfeed on Australia’s Parliament floor. In an ideal world, the image of Waters and her baby wouldn’t be so newsworthy because it would simply be normal. But with Mother’s Day around the corner, there’s no better time to think about this milestone in the context of how working moms are faring in the workplace.

Accenture, a company with a longstanding commitment to diversity and inclusion, is doing just that. In fact, in honor of Mother’s Day, the company decided to probe deeper into their recent “Getting To Equal” research — which was originally published to coincide with International Women’s Day — to get a sense of what mothers, specifically, are experiencing in the workplace.

I recently spoke to Mary Hamilton, Accenture Labs managing director based in Silicon Valley, to get a sense of what this research means and how it might be used to make workplaces more welcoming to mothers. A mom herself who has just returned to work after having twins, Hamilton spoke candidly about her own experiences in conjunction with this research.

At the outset of our conversation, she clarified, “This is really an extension of the research that we had done — looking at the statistics and all the data that we already had and taking a different spin on it. We wanted to think about not just how women are managing their careers, but think about that from a mother’s perspective and consider what that means for working mothers.”

The research tackles a debated question: Does motherhood diminish career ambition? According to Accenture’s research, the answer is absolutely not. Hamilton explained that the research was conducted, in part, to debunk this myth. “It’s assumed that when a woman becomes a mother, her professional ambitions shift — but what we’ve found is that’s absolutely not true. They return to the workplace aspiring to senior leadership positions — even aspiring to start a new company. From my personal experience, we may change how we work, but our ambition doesn’t change.”

Indeed, Accenture’s research reveals that working mothers have the same or even a higher level of career ambition as those without children; working mothers in the U.S. are just as likely to aspire to be in a senior leadership position (70% and 67%), they are more likely to change jobs for a promotion or for higher pay (2.5 times vs. 2.0), and more U.S. mothers than those without children say they would like to start a business within the next 10 years (53% vs. 35%).

Moreover, Accenture has found that digital has helped mothers return to work with more ease. U.S. moms are leveraging digital to juggle commitments and increase their own flexibility; 76% of those surveyed say they believe digital is important for career advancement, while 60% use digital to balance career and family life.

So what can companies do to better support working moms and eliminate bias — whether unconscious or otherwise? Hamilton, who feels lucky to work at a company where she hasn’t seen an ambition bias toward moms, shared her insight. She’s taken maternity leave twice now, and says that after both periods of leave, she was offered additional opportunities and responsibilities soon after returning to the office. 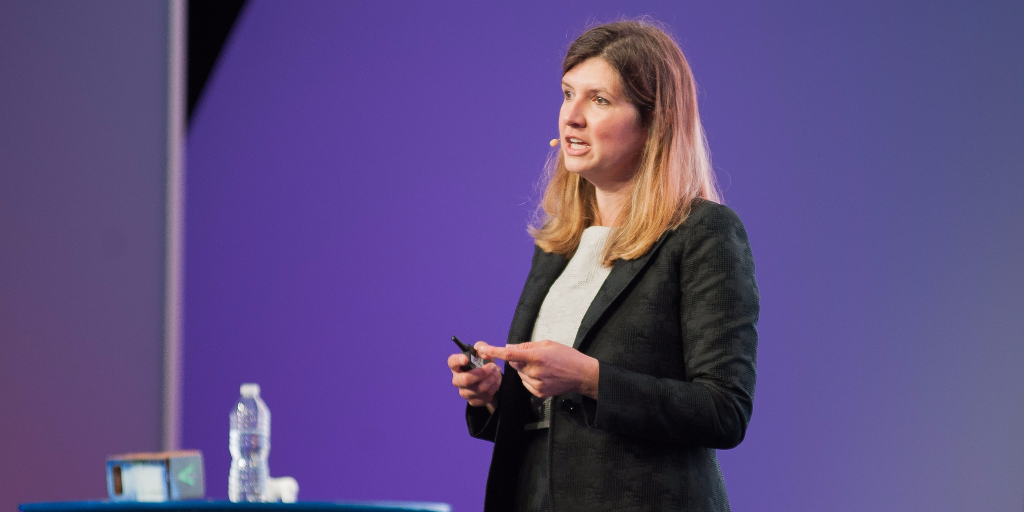 Mary Hamilton delivering the keynote at the Opticon Conference after returning from leave with her first child. Photo courtesy of Accenture

“For me, it was really important to take on new opportunities, and Accenture really did offer me an opportunity to stretch and take on those roles,” she said, adding that she proved she was capable and committed. “I think I became more efficient,” she reflected. “As a mom, you really have to make the most of your time in the office.” She added that she’s worked with various leaders at the company, but all have been “extremely supportive.”

Hamilton also noted the importance of using sites like Fairygodboss to help women understand which companies do support working mothers. She explained that as a woman in tech — particularly in Silicon Valley, which is known to be dominated by men — it’s especially important to work toward building more inclusive environments.

“I’m in research development and tech, where the number of women is really abysmal, but I’ve worked hard in Silicon Valley to grow our women’s footprint, and I know for a fact that when we’re able to show the women we recruit what we offer here [at Accenture], that allows us to bring in the next round of really successful women.”

Hamilton added that it’s just as important to retain female talent: “If we can show them all the way through their career that we don’t look at them differently [if they choose to have kids],” that helps women feel they’re being appreciated for their work, no matter what kinds of priorities they’re juggling.

For the women who do experience mommy-tracking, Hamilton stresses the importance of networking. She recalls that when she returned to work after her first son was born, she and other moms came together to think about how they could help make this transition easier for the next generation. Accenture wound up doubling the amount of leave they offer (from 8 weeks to 16), so Hamilton was able to enjoy that extended time off the second time she gave birth.

In addition to networking, mentoring is a powerful tool for working moms. Hamilton suggests “finding a leader who you trust; find advocates both within and outside of your organization who can look out for opportunities that might help you on a slightly different trajectory or help you find increased responsibility or flexibility. Find those advocates and use your networks to support you.” In other words, she said, if you’re feeling stuck, it might be because of bias, but you might also need to be clear about your ambitions.

She also emphasized the importance of cultivating a pay-it-forward mentality and making sure women in leadership roles are proactively making sure their workplaces and teams are family-friendly. For example, Hamilton says that when she recently worked to plan a retreat, she had the idea of inviting all parents and families to make it a more family-driven activity.

“I reached out to the team planning the retreat and said, ‘I’m a working mother, so here are the things I need (which included time and a place to pump, without missing any important meetings or discussions).’”

Hamilton reiterated that she’s extremely proud to work at Accenture, especially because her company is digging into their research from a mother’s perspective. If other companies follow suit, working moms will continue to gain long overdue respect.