Be honest: do you have a preference for a male or female boss? If you don’t, you’re not quite in the majority but you’re in good company with a plurality of American s polled for whom a manager’s gender makes no difference to them. 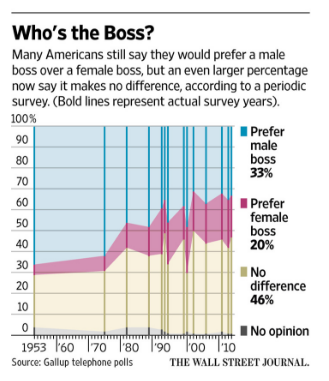 This is refreshing fact at a time when the battle for the ultimate management job (President of the United States) is being fought in part, through a gender lens. But for those who express a gender preference, why are people more than 50% likely to prefer a male boss over a female boss? Is this simply unconscious bias at work?

Yesterday, the WSJ published results of analysis that may provide one explanation for the difference. Professors Lisa Williams of Goizueta Business School at Emory University and Larissa Tiedens of Stanford’s Graduate School of Business found that women are penalized for being “too aggressive”, even if their behavior is identical to men’s. They concluded:

Women were particularly penalized for direct, explicit forms of assertiveness, such as negotiating for higher salary or asking a neighbor to turn down the music. Dominance that took a verbal form seemed especially tricky for women, compared to men making identical requests.

The implications for women in management or leadership positions is that they may be judged unfairly or penalized for behaving in the same way as men. The researchers found that the penalty for women did not appear in the form of being judged less competent than a man, but being considered less ‘likeable’, which has career consequences (not just social ones). As Williams points out: “‘Difficult’ people are unlikely to be invited to join projects, teams or boards.”

The Gallup poll data showing more people preferred a male boss when they did have a gender preference was based on both male and female respondents. However, their results match up with a Fairygodboss poll which had 100% female respondents. Among Fairygodboss women, 40% of those surveyed said that male and female bosses were equally supportive of them, followed by male bosses, with female bosses coming in last. So, it seems that even among women, a larger percentage prefer having a male boss over a female one. 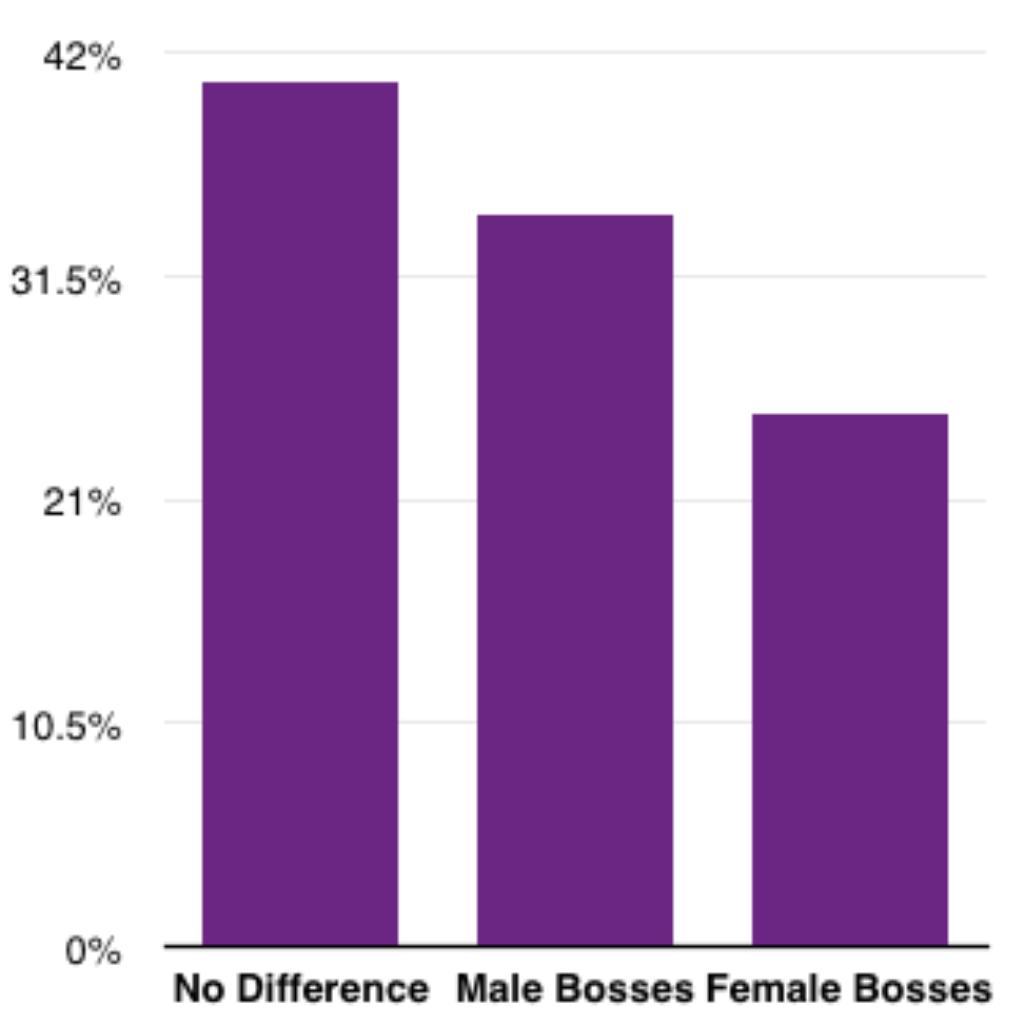 Fairygodboss Survey: Who do you think is more supportive: male or female bosses?

There are other potential explanations for why women may believe a male boss is more supportive of them. Certain women I have spoken to about this question of why women prefer working with me have said that there is a certain element of competitiveness. Certainly in Fairygodboss reviews, some members of our community say that some female leaders are not necessarily helpful to other women. It could be the phenomenon that Sallie Krawcheck has described as being “Queen Bee-ed”.

In other words, if there’s only room for a limited number of women at the table, it can be threatening to your own advantage to have too many other contenders around for your seat. Another explanation Krawcheck has proffered is that the rare women who make it to the top of their field may have less empathy for those who struggle because they don’t personally relate to those struggles. It’s a kind of “I did it, so why can’t you?” attitude which can make a generation of women pioneers seem steely and remote to another, younger generation of women.

Moreover, I can’t help suspect that for those women who have had a single or double bout of a bad experience with a female boss, there may be little subsequent opportunity to rectify their views. After all, there are relatively few female managers to begin with – so an isolated negative experience can be extrapolated far beyond its statistical significance.

Indra Nooyi, CEO of PepsiCoPepsiCo"> recently made this statement at an AOL Makers conference: “I don’t believe women help women enough in the workplace,” noting that her mentors have all been male. While there’s no simple solution to changing our biases overnight, to rectify this situation, each of us women in the workplace should pause the next time we have either an opportunity to help another woman, or we are quick to judge another.

While some behaviors are unacceptable from a manager or colleague of any gender, we may want to check ourselves the next time we’re judging someone by their leadership style. For all of us in the workplace,let’s make sure we’re not unfair in our assumptions about how we think men or women “should” behave . That woman who has raised your ire may be less warm or empathetic than you wish her to be, but it may simply mean she’s busy trying to navigate a workplace with difficult social expectations…and busy trying to do her job (just like a man would).

Have you had a female boss or colleague who undermines you at work? If so, share your advice and opinions with other women in our community.